For the Bombers men’s lacrosse team, it’s about more than just the sport.
by Khrista Trerotola ’07

Wes Patterson, a gray-haired, tall, and confident member of the Tuscarora Nation — part of New York State’s Iroquois Confederacy — crafted my first lacrosse stick. It was a single piece of cut wood, shaped like a cane, and threaded with leader, gut, and rawhide. As a boy, Mr. Patterson told me, before he could play on the lacrosse team he’d had to select a hickory limb; cut, steam, bend, and shape the limb; then string a net himself.

Growing up in a suburb right outside of Buffalo, New York, not too far from the Tuscarora Reservation where the largest producer of wooden lacrosse sticks — Tuskewe Krafts — is located, I was lucky enough to learn the sport and its culture firsthand.

In my 12 years as a player, which included four years on IC’s women’s varsity team, I’ve experienced numerous changes — in rules, equipment, styles of play, and methods of coaching. Along with these changes have come the sport’s increasing popularity, at least in some regions of the United States.

One thing that hasn’t changed — in fact, has become stronger — is the brother- and sisterhood of those who play or are fans of the sport. This might have something to do with the sport’s rich history, from its beginnings centuries ago as a game of the Haudenosaunee, or Iroquois Confederacy, consisting of the Mohawk, Oneida, Onondaga, Seneca, and Tuscarora nations.

As a member of the IC women’s team, I’ve experienced this strong bond with lacrosse enthusiasts, teammates, alumnae, and our families. Current and past players of the men’s team know that bond well, too.

The Ithaca varsity men’s lacrosse team has been creating a legacy on South Hill for nearly a half century — and is looking to carry on this legacy for centuries to come.

What started as an intramural program in 1946 and eventually became the varsity team in 1967 has become a national phenomenon. Ithaca lacrosse has featured some of the most elite players in Division III. For these current and former Bombers, Ithaca lacrosse also represents many of their closest friendships and fondest memories of life on South Hill, and it passes through generations of alumni.

“Part of what makes the program so great,” says program alumnus Brian Weil ’05, “is the camaraderie of the team, which I think is reflected by the fact that the alumni who used to play still follow the team and come back when they can to show their support. That goes a long way in establishing the culture of a program, where you feel as though you are a part of something that lasts longer than just the four years you spent at IC.”

The families of past and current players become “IC lacrosse alumni,” too — or maybe it’s that the players become part of one another’s families. “Everyone’s family has been so nice and supportive,” says Matt Hammes ’07, now assistant coach for the team. “Not only do your teammates become lifelong friends, but some of their families do, too.” A potluck that spreads across multiple card tables greets players and families after almost every game, rain or shine. “It’s a joy to go to the tailgates,” Hammes says. “There are parents of alumni who come back even when their sons aren’t in town.” He’s not exaggerating: When this year’s team went on its run in the NCAA men’s lacrosse Division III playoffs, plenty of alumni — and alumni family — were in the stands.

Logan Bobzien ’08, Mike Nowak ’08, iBrandon Rose ’08, and their six classmates on the 35-man team wanted nothing more for their senior lacrosse season than to “make it to Boston” — the location of this year’s NCAA men’s lacrosse Division III finals, held over Memorial Day weekend. After clinching both the 2008 Empire 8 Conference champions title and an automatic bid to the NCAA tournament for winning the conference playoffs, Ithaca beat Williams College 17-10 to advance to the NCAA quarter-finals. The team then faced Western New England College, winning 13-12 in overtime. Then, just one game short of the finals, Ithaca lost in the semi-finals to archrivals SUNY Cortland. The Bombers finished the season 17–3 overall, and 7–1 in the Empire 8.

In 2007 the Bombers made an appearance in the NCAA tournament on a wild card, losing in the quarterfinal round to Gettysburg College. Ithaca was also crowned conference champion and advanced to the semifinals of the NCAA in 2002; and in 2004, 2005, and 2006 the team was seeded first in the conference playoffs but failed to obtain the NCAA bid. Claiming both the conference title and the playoff bid was a first-time achievement for this year’s team — an extra big deal for the seniors.

“I’ve played lacrosse at Ithaca for two years,” says Rose. “I played at two other colleges before this, and none of those teams was like Ithaca’s. I want [us to] be known as the class that led Ithaca’s most successful season. The level of heart, desire, and chemistry on this team is so high. And the support of the parents and alumni is incredible.”

This year’s team didn’t make it to that final game in Boston, but plenty of those fans, including most of the seniors, traveled to Boston to watch the championships.

That’s what lacrosse players do. We may lose, but we pick ourselves up and go out to the field to watch good lacrosse games and learn from them. We can’t just turn on the TV and hope to find a lacrosse game to watch, as baseball or football fans do. This, perhaps, is another reason the culture is unique.

Of course, a successful team and program, aren’t made just of great players, but of great coaches, too. Jeff Long — who was a three-time all-American lacrosse player at the U.S. Naval Academy — has coached the Bombers for 21 years and was named Empire 8 Coach of the Year in 2005, 2006, and 2008.

“Coach Long deserves a lot of credit for bringing in so many talented players,” says Weil. “The team is made up of guys from all over the place, which says a lot about how lacrosse has spread to different parts of the country, but also about Coach Long, since he’s been on the ball about recruiting players from areas that aren’t traditional lacrosse “hotbeds.” The hotbeds are located along the East Coast, particularly Long Island and the Baltimore area.

Rose enjoyed much about playing lacrosse at Ithaca, including the team spirit of the players’ parents and the way Long gives his athletes free rein to experiment. Long explains his coaching philosophy thus: “We try to keep it simple and build on the fundamentals. We like to give the kids creativity and options, and watch each individual and the team grow from there.”

In leadership and decision making, Long says, he “lets the seniors run the show,” allowing them the freedom to decide what’s important to them. “We’ve got good captains and upperclassman,” he says. “It’s about them and the legacy they leave behind. I get to come back — I never graduate! — so I give them the responsibilities.”

In the world of Division III lacrosse, the Bombers are well respected, but Long, unlike most coaches, never checks the pre- and during-season team rankings. “I don’t really think about what others think about us,” he says. “I hope they would say Ithaca lacrosse has class and passion, [and that we are] respectful and good representatives of the school.”

Its nice to read things about my grandfather and how he affected ppl in the sport even after he has passed, thank you for your kind words

Felicia, Your grandfather was an amazing man and was very influential in my development as a lacrosse player--and now I realize, influential in my development as a person, as lacrosse had played a major role in my life through college. I was lucky enough to attend a few of his 5-day summer lacrosse camps and even practice a couple times with the University of Buffalo Club team when he was coaching and I was in high school. The best to your family and to keeping the spirit and tradition of the sport alive!

as a proud Ithaca college grad(73) and former member of the Bomber Lacrosse team I can truly say that the best times that I had at Ithaca were with my fellow Lacrosse players! years later my former teammates continue to be my good friends I look forward to meeting up with them in the future! to continue our legacy! I would like to give a big shout out to our now retired coach Walley Ware who continues to make an effortto stay in touch! and keep our special group of friends! togeter! john Mackintosh Tosh 73

I have always been proud to call Jeff Long my Naval Academy classmate and friend, but never more so than after reading this article. Ithaca College should be even more proud of what this fine man has done for your college and the young men he has coached along the way...one of whom is my son, Joe, albeit only for one year.

I grew to truly love the game of lacrosse watching Longman play at Navy. He was a wonderful teammate. That he is still the all-time leading scorer in Naval Academy history after almost 40 years speaks volumes about just how great a player he was. However,the fact that he had over twice as many assists as he did goals, is a testament to HOW he played the game...totally unselfish. This reflects in how he coaches and his teams play today.

The Blue Bombers are truly blessed to have a Hall of Famer not only as their lacrosse coach, but as an outstanding representative for the university and role model for all its coaches. 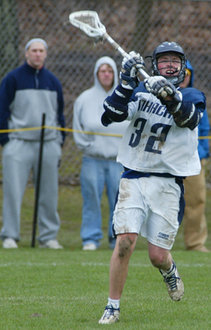 “It’s about [the players] and the legacy they leave.” 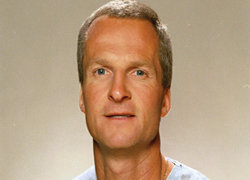