Shannon Walton ’04 owns her own sports psychology firm in Honeoye, New York, called the Ultimate Mental Edge. There she works with athletes from ages 10 to 20, helping them excel in the competitive sports world. Her clients include soccer players, softball players, cheerleaders, golfers, and squash players.

“We’re working on their mental game,” she says. “They have physical training five days a week. It’s the same kind of thing for mental skills.”

One high school squash player says one of the most important things she learned from Walton was to have a consistent warm-up routine that included a physical warm-up, visualization, deep breathing, and self-talk.

“Four months ago, when I lost a point in squash, I would have gotten super angry, slammed my racket against the wall, and lost the game,” she says. “Now, after working with Shannon, I calmly wipe my hand on the wall, take a deep breath, ‘self-talk,’ and win the next point. Just talking about the mental aspects of my sport has helped me learn about myself and that I can drastically improve my game just by being mentally prepared.”

Walton has her clients create a custom performance routine to help prepare them for competition. Athletes then implement this routine consistently to make sure their energy is concentrated on the correct aspects of their game that will help them compete to the best of their ability.

“Shannon has taught me how to set proper goals and to be process oriented instead of just results oriented. In the past two years I’ve become much more comfortable with myself and confident in myself,” says Maddie Reese, who now plays softball for the University of Arkansas. “I know the skills that I’ve developed will help me to excel at the collegiate level and to have that mental edge over my opponents. Just as important, these are skills that will help me succeed in life.”

Rather than being outcome driven and focused just on concrete steps, Walton says her personality is to be more nurturing.

“I look at everything that is going on with an athlete and try to get them to open up about their feelings about the issue,” she says.

Walton also works with injured athletes as they recover, helping them cope with being forced to the sidelines and coming back after major injuries, like ACL tears, or broken arms or legs. Studies have shown that maintaining a positive attitude and employing mental skills training can help athletes recover more quickly from physical injury. 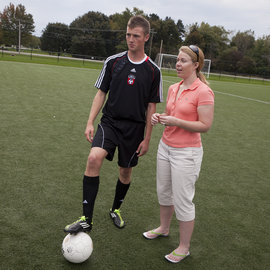