In announcing this news, vice president for institutional advancement Shelley Semmler added, “The entire Ithaca community has been engaged in this monumental initiative.” Semmler and her staff have been traveling around the country to regional campaign events—often accompanied by the president. She says, “We have been heartened by the widespread loyalty of alumni, faculty, and friends. The campaign, which is slated to run through 2007, faces the challenge of raising the remaining $14 million.”

The campaign is supporting six priorities: the sustainably designed School of Business building (watch construction progress at ithaca.edu/business); the athletics and events center; scholarships; academic innovations; the Ithaca Fund; and student housing (already fully funded). To date, the College has raised $101 million, including a $4 million challenge grant for the A&E center (Ithaca must raise an equal amount from other donors to receive the funds).
In the following pages, read about some of the people who are making a world of difference in the lives of our students. Should you find their stories inspirational, please call development at 1-607-274-1391 or make your gift online at ithaca.edu/giving. For more campaign information, visit ithaca.edu/campaign. 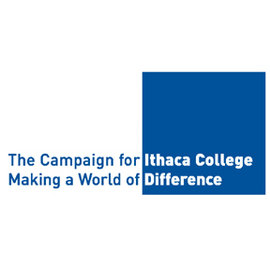