Supporting the next generation of health care leaders. by Kate Larrabee

Some people change careers often, and some know early on the direction they want their career to take. Jack Dembow is among the latter group. Following his graduation from Ithaca College with a degree in health services administration, Dembow was hired as an assistant administrator at a 200-bed community general hospital in Philadelphia. That led to positions of increasing responsibility, some at large health care networks. In 1997 he was appointed vice president of the Jefferson Health System, the largest health care alliance in south-eastern Pennsylvania. He retired from JHS in 2001.

Though he hadn’t stayed in close touch with Ithaca since his graduation, memories of Dembow’s College years came back to him following retirement. “I traveled a lot, rebuilt my house, and developed into a pretty accomplished potter,” he says. “In that period of reflection I realized that during my career I had met a number of talented employees who, had they been able to earn a degree, could surely have transitioned into top management. The college experience had made such a crucial difference in my life — it was a great opportunity to transition from a geeky high schooler into a thoughtful adult — and I saw where it could do the same for others. So I reconnected with my alma mater and decided to endow a scholarship. ”

In 2003 he established the Jack H. Dembow ’77 Scholarship, which is awarded annually to a student with strong academic achievement and demonstrated financial need who is entering Ithaca College to prepare for a career in health care leadership. “I wanted to help make sure that talented people wouldn’t be held back for the lack of a college education,” Dembow says. “My thinking was predicated on my knowledge of the complexities of the health care system we have today, and the need to produce young leaders who understand and appreciate [the importance of a system that] works well and really serves all people. Despite its inherent problems, in all facets of the health care field we have fantastic technology and medical breakthroughs happening every year. And there are health care leadership positions in the insurance industry, managed care, large group physician practices, and a host of other options that didn’t exist 30 years ago.”

Dembow’s retirement was short-lived; in 2005 he accepted an offer to be the president and CEO of Jewish Family and Children’s Services of Greater Philadelphia. “I never imagined I would go back to work after retiring,” he says, “but having an opportunity to head an agency that does so many good things for nearly 37,000 people each year makes coming to work each day a pleasure. I’m finding that making tough business decisions is actually easier when you voluntarily elect to reenter the work force after having been retired. I’m less concerned about my future and more focused on doing the right thing.”

At the same time, Dembow is pleased to be supporting the next generation of leaders in health care. “I receive written communication from students who have been awarded the scholarship, and I would be lying if I told you that I don’t feel fantastic each time I rip open their letters. Last October I visited IC, and the College had arranged a dinner for me to meet the current recipient of the scholarship, Paola Acosta ’07. I couldn’t have been more impressed with Paola. She invited me to attend some of her health policy courses, which I did. I was equally impressed with the content of the course material and the discussion.”

Dembow has also built in a bequest for Ithaca College in his will. “In the meantime,” he says, “by my continuing to fund the scholarship, the College can use my dollars today to attract smart, enthusiastic students to IC for many years.”

Dembow finds the idea of a scholarship — a gift that keeps on giving — very appealing. “I make contributions to many organizations, as we all do,” Dembow notes. “But those gifts don’t necessarily encourage the recipients to become donors themselves. I’d like to believe that my scholarship support today will beget someone else’s scholarship support tomorrow.” 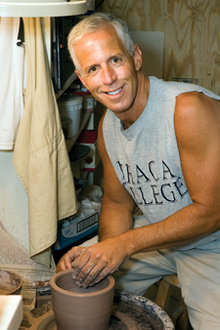