This year, one of IC’s own — activist and four-time Grammy nominee CCH Pounder ’75 — delivered the Commencement address. An alumna of the theater program, Pounder has numerous film, television, and theater credits, including her recent role as the Na’vi spiritual leader Mo’at in Avatar. Born in Guyana, she is a cofounder of Artists for a New South Africa and a board member of the African Millennium Foundation. In her remarks to the new graduates and their guests, Pounder urged her fellow alumni to use their education as a springboard to courageous initiative and passionate involvement. She also paid homage to a former mentor, professor emeritus of theater arts Earl McCarroll. Read coverage of her address. 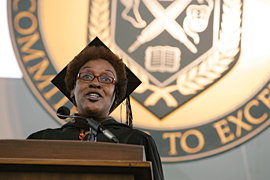 Read coverage of her address