Bob Iger ’73, president and chief executive officer of the Walt Disney Company, was honored as MarketWatch CEO of the Year.

In October 2005 Bob succeeded Michael Eisner as the sixth CEO in the 83-year history of Disney. He has served on the Ithaca College Board of Trustees and is currently an honorary member as well as honorary chair of the Campaign for Ithaca College. He is a member of the board of directors of Lincoln Center for the Performing Arts, a trustee of the American Film Institute, and serves on the executive advisory board of the Elizabeth Glaser Pediatric AIDS Foundation.

According to the announcement by MarketWatch, a subsidiary of Dow Jones, “With a blend of bold strokes and olive branches . . . Robert Iger has re-imagineered the Walt Disney Co.’s culture and reanimated its stock. . . . The company, formerly bogged down by board and shareholder discord, has emerged as an example of good corporate governance.” 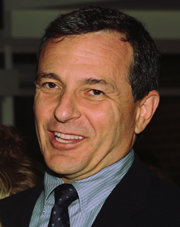