Freshman class is the biggest in IC history.   By Maura Stephens

College admission is a tricky business at any time, but these days it’s especially challenging. First, demographic data indicate that the size of high school graduating classes started decreasing in 2008 and will continue to decrease over the next 8 to 10 years. Second, the global financial crisis of 2008–09 has affected people from across the economic spectrum, making it tougher for families to come up with tuition and room and board fees.

Yet despite these odds, Ithaca College welcomed its largest entering freshman class in history this fall. How did it happen? In no small part because the admission, financial aid, and marketing communications staff, worked hard to ensure a good-size class for 2009–10 after the disappointingly small 2008–09 freshman class.

While Ithaca College has been growing in prestige over the last several years, making it more attractive to potential students, aggressive enrollment strategies this year led to a larger than expected class. Strategies included offering more financial aid than ever and pumping up the social media peer-to-peer marketing.

But the large class, while heartening in most ways, brought some temporary challenges. Housing was short, so the residence life staff responded by identifying more off-campus living options for sophomores, juniors, and seniors; converting lounges into living space; turning some doubles into triples; and constructing a temporary student housing building that has beds for around 80 students. Staff in academics, dining, and other services also adjusted for the larger-than-expected freshman class.

“Everyone rose to the challenge,” says Brian McAree, vice president for student affairs and campus life. “It’s exciting to feel the extra energy on campus that comes from having so many newcomers.”

“I often focus on how an Ithaca College education transforms our students,” wrote President Tom Rochon in his August 3, 2009, blog. “But the opposite is also true: our students transform the College.”

You can read the president’s full blog entry at www.ithaca.edu/president—“Hail the Class of 2013!”

IC should be ashamed of itself. It's bad enough to overcrowd the freshman class, but patting yourselves on the back for it in IC View takes the cake. Sure, it's a celebratory event for IC's budget, to be receiving a whopping $44,000+ from its largest class ever, but these students are paying the price--literally and figuratively--for IC's greed. I lived in the dorms at a time when we actually used the student lounges as--gasp--/lounges/. And we used them all the time. The following year, IC overcrowded the students, and we lost our lounges as they were converted to dorm "rooms." These students are paying more money than ever to attend the College and having a place to gather and socialize or study or watch TV without having to leave your dorm building is a privilege they deserve. The TV lounge was where I met many of my closest friends still today. It's where I could stay up until 2 a.m. talking with those friends without bothering my roommate. It's where my boyfriend of 11 years now first flirted with me. It's where we gathered together to watch the Superbowl, the Oscars, to celebrate birthdays, >> or just to take a breather from a roommate in those cramped rooms.
If IC put one-tenth of the attention on its students' physical comfort that it does on their psychological comfort--with all the hypersensitivity to diversity and sexuality--it would make the College a much better place for them. And these students deserve it. They're paying more and more each year for less and less. Back off of your quest for more bodies (read: $$$) and GIVE THEM THEIR SPACE! 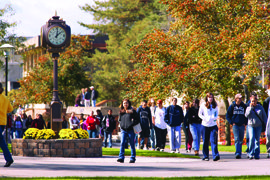