Cover Story: Getting In

As competition to attend Ithaca heats up, we look at how admission finds the students who will be a “perfect fit.”     by Sherrie Negrea

Meg Schneider ’11 knew from the age of seven, when she landed a part in Peter Pan at a community theater in Houston, that she wanted to perform on Broadway. To train for her budding career she had enrolled in ballet, tap, and jazz dancing classes at age four and started voice lessons in the sixth grade. By her junior year in high school, Schneider began researching the best college programs in theater in the country. She ranked Ithaca College as her first choice. After auditioning for 10 programs and considering two other offers — from Florida State and the University of Oklahoma — she became one of 16 students selected from a pool of 600 applicants who enrolled in IC’s musical theater program this past fall.

Such competition is “a good model of what our lives are going to be like after college,” says Schneider, who graduated in the top 3 percent of her high school class with a combined SAT score of 1500 on the math and verbal tests. Not every program selects as few applicants each year as musical theater, the College’s most competitive major. But with a surge in applications and an increase in SAT scores, getting into Ithaca College has become increasingly difficult over the past decade.

Since 1997, applications to the College have jumped 55 percent, from 8,064 to 12,506 this year, according to Larry Metzger, M.S. ’87, IC’s dean of enrollment planning. SAT scores for the combined math and verbal portions of the test have climbed 3 percent, from 1146 to 1185, during the past 10 years. And during the same period the average high school ranking of entering freshmen has risen from the top 25 percent of their class to the top 21 percent.

“Most of us who work here would agree that the profile of students at Ithaca College tends to get stronger every year,” says Lee Byron, associate professor and chair of IC’s theater program. “And the reputation of the College is very strong across the country.”

While the selectivity varies across programs and majors, it has become increasingly tough in IC’s most competitive programs: musical theater; acting; sound recording; film, photography and visual arts; music composition; other music and theater majors; cinema and photography; journalism; and physical therapy.

In the School of Music, for example, demand for auditions has nearly doubled over the past decade from about 600 to more than 1,000 each year, according to Townsend Plant ’97, M.M. ’00, director of music admission. After auditions are held in major cities across the country, the applicant pool is whittled down to 120.

Johnny Rabe, a freshman music composition and education major from Greenwich, Connecticut, arrived at his audition last February armed with several film scores and a choral work he had composed in high school. After singing three pieces at his campus audition, Rabe was accepted into IC’s School of Music and then promptly withdrew his applications from Boston University and New York University.

“Ithaca happened to be my first choice school because the music school program is so good. I also liked all the people involved in the music program,” says Rabe, who then visited campus during a program hosted by  music dean Arthur Ostrander after he was accepted.

“There has been a steady increase in the number of high school graduates, and that has been to our benefit,” Metzger says. “It only allows us to be more competitive if we have more applications.”

Yet admission officials and several faculty members credit the quality of the academic programs with fueling the spiraling number of applications, which in turn has boosted Ithaca College’s national reputation. Projects such as the new $17 million School of Business building, which is seeking platinum-rated Leadership in Environmental Energy and Design (LEED) certification, and the College’s leadership in the higher education sustainability field, have also garnered national attention for the College.

“My perception is the College has changed in the last 20 years,” says Steven Skopik, chair of the cinema, photography, and media arts department. “When I started at Ithaca College, it regarded itself and publicized itself as a teaching institution, which meant that faculty members’ responsibility was most heavily weighted toward excellence in teaching. We’re still primarily emphasizing teaching undergraduates, but I think the expectations around being a scholar or an artist or researcher have increased. That has an effect on the competitiveness of an institution. The impact of having the faculty out there having their work screened or in publications or galleries — that’s the kind of thing that a student may notice.”

Ithaca College has traditionally identified itself as a comprehensive college, with a solid humanities and sciences core and myriad programs in the four professional schools (business, communications, health sciences and human performance, and music). One of the reasons the College is attractive is that students can specialize in a field yet still receive a liberal arts grounding.

“Few institutions can offer you some 100 degree programs, an 11-to-1 student to faculty ratio, and an average class size of 15 students,” points out director of admission Gerard Turbide. “Ithaca offers the academic diversity of a university and the personal attention of a small private college.  It’s large enough that you can meet new people every day and small enough that you’ll see your friends every day.”

The school’s size is one factor that hooked Kaitlyn Parrotte, a sophomore physical therapy major from Central Square, New York, on Ithaca College. It didn’t hurt that it offered a highly respected program in her major and a strong music and theater department. “It’s not so small that everyone knows everything about everyone and there’s nothing to do,” Parrott says. “And it’s not so big that you’re overwhelmed with people.”

Ranking third out of 300 students in her senior class and having earned 24 college credits by the time she graduated, Parrotte is exactly the type of student IC admission counselors are seeking in this competitive environment. The most crucial factor in any application is still the student’s high school transcript, Turbide says, though recommendations, the required essay, SAT or ACT scores, and extracurricular activities are also taken into account.

“The criteria have changed by virtue of the fact that we’re more selective,” Turbide says. “But the most important thing we look at in the admission process is the high school record.”

While applications have surged for first-year students, they have also poured into IC’s graduate programs, rising to 600 from 350 five years ago, says Gregory Woodward, dean of graduate and professional studies (who has just been named dean of music). With the greater number of applications, the selectivity for the approximately 250 first-year graduate slots has also increased.

Colleen Sager, a graduate student in sport psychology from Santa Fe, New Mexico, says she chose Ithaca College because of the outstanding reputation of her program. “After doing a lot of research, [I learned that] Ithaca College has one of the best master’s programs in the country,” she says. “I applied here along with eight other schools, but Ithaca was my top choice.”

Though the number of applications and SAT scores has grown in the undergraduate level, the yield, or percentage of students who actually matriculate as freshmen each year, has declined 9 points, from 31 percent to 22 percent, over the past two decades. Metzger sees this drop as a natural outgrowth of the surge in applications and the change in the college admission process nationally. High school seniors today typically apply to more colleges than they did a decade ago. More than 25 percent of all first-year, full-time college students submitted more than five applications to college in 2005, according to the Cooperative Institutional Research Program, a national longitudinal study of the American higher education system. “More applications generally mean more acceptances,” says Metzger, “and thereby more options for a prospective student. Whereas a student five years ago may have had two or three offers of admission, today they have three or four offers. The more offers, the less likely each offer is of yielding the student.”

Another factor that may be depressing yield is Ithaca College’s decision to join the common application process, in which students submit one application online, along with supplemental information for each school, to any number of colleges. The ease in applying has allowed more students to list Ithaca College as a backup school. “If it’s easier to apply to colleges and now it’s just a matter of checking off another one and answering a couple more questions, there may be applicants in our pool who are not as interested as others,” Turbide says.

The drop in yield, nevertheless, has prompted IC’s admission officials to launch a series of activities designed to improve the percentage of students who matriculate. Now encompassing the entire campus community, the effort includes initiatives such as IC Peers, an online community for admitted students to communicate with faculty and students at the College. Last April, the College began publishing Fuse, a quarterly, student-written magazine that is sent to prospective students and high school guidance counselors (see "Lighting a Fuse").

The emphasis on enhancing yield may become even more important in the next seven or eight years, when the pool of high school graduates in the Northeast is expected to dip by 10 percent, which could result in a lower number of applicants to colleges in this region.

What seems to be effective in boosting enrollment is the personal contact students experience while visiting campus. Eric Van Fleet, a junior biochemistry major from Mifflinburg, Pennsylvania, says he originally made a trip to Ithaca at the end of his junior year of high school to visit Cornell and decided to check out Ithaca College at the same time. While on campus, he met biology professor Vicki Cameron, who told him about the opportunities for undergraduates to conduct research with faculty.

“I decided I liked Ithaca more,” says Van Fleet, who applied to IC, was accepted two weeks later, and has since been happily conducting molecular biological research at the College. “It just had a better feel to it.”

A campus visit may, ultimately, serve as the deciding factor for many prospective students. With more programs aimed at attracting applicants to campus, the gains IC has made in the competitive college marketplace are likely to continue.

“When I came for the tour, I kind of felt at home,” adds Parrotte, the sophomore physical therapy major. “It was the first school — and I had been to other schools — where it felt right to be here.”

Acceptance notification now comes in the form of a welcoming package, as befits the momentousness of the news inside. 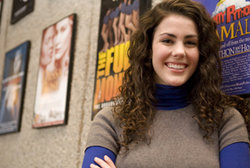 Eric Van Fleet ’09 loves working directly with faculty like biology professor Vicki Cameron — which is why he chose Ithaca over Cornell.