Thirteen years ago, Bhutan became the last nation in the world to introduce television to its citizens. Since then, the people of Bhutan have tried to balance the influences of Western media with long-held cultural values.

Chris Sperry ’79, the director of curriculum and staff development for Project Look Sharp, traveled to Bhutan in January to work with officials from the Ministry of Information and Media, as well as Bhutanese educators.

“The monarchy knew that opening up their society would have both positives and negatives,” said Sperry. “They also recognized that media literacy is a critical component of citizenship and helping transition to participatory government.”

In his blog, Sperry wrote about the resistance some had to teaching critical thinking skills. Some feared that teaching students to question their instructors would undermine traditional authority. Others were concerned that decoding Buddhist paintings might trivialize them.

“For most of its history, Bhutan was an absolute monarchy with one of the world’s more isolated societies,” said Sperry. “As Bhutan attempts to develop civic and democratic institutions, its leaders are also rightfully concerned that the rapid introduction of Western media influences has the potential for undermining the strength of its traditional Buddhist culture.”

Read the blog about Project Look Sharp's visits to Bhutan.

Note: Bhutan’s constitutional monarchy measures the quality of life for its citizens in “gross national happiness” rather than gross domestic product. See the “Pursuit of Happiness” article for a list of the happiest countries. 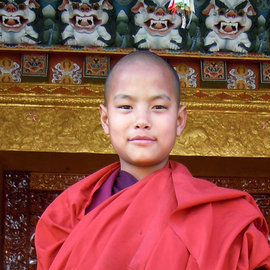 A young nun in Bhutan