It's 2:40 p.m. on a Tuesday at the Dorothy D. and Roy H. Park Center for Business and Sustainable Enterprise. Fall semester has just begun, and the light-filled hallways are also starting to fill with students chatting with one another as they find their way to their three o’clock classes.

The energy and bustle coursing through the building is electric. The environment, too, is dynamic: flat-screen TVs show business news programs; the ticker in the trading room gives the latest stock prices; students and professors gather at a café on the second floor. The building is alive — both metaphorically and literally — due to its living roof, which uses native plant species to manage water runoff and mitigate the loss of land the building’s construction required.

The home of the business school opened its doors in 2008. Its appearance on campus was brought about by Dorothy D. Park — head of the Park Foundation, a philanthropic organization established after her husband, Roy, passed away in 1993. Though she directed the philanthropy of the foundation, she personally funded the business school building project, giving $7 million initially, then, when the project surpassed its budget, another $3 million to make the facility a reality.

At the time she announced her gift, Mrs. Park said, “I am delighted to be able to contribute toward a building that houses not just a school but also a way of thinking and being that exemplifies ethical business practices, an understanding of organizations as citizens in their communities, and the responsible use of natural resources.”

Mrs. Park attended the dedication for the business school building in 2008, the last event she would celebrate on IC’s campus. In 2008 she was 96, and her health was declining. This year, on June 18, Mrs. Park passed away at her home in Cayuga Heights at the age of 103.

Bill Haines was a trustee at Ithaca College from 1995 to 2001. When the college was in the planning stages for the business school building, he was chair of the board and had occasion to see and talk to Mrs. Park often.

“She had a warm character — a sense of humor and a sense of self,” Haines recalls. “She was a Southern lady, so she had to me a kind of Southern charm, but behind that charm there was a very strong human being.”

Mrs. Park was born in 1912 in Raleigh, North Carolina. She attended college in Raleigh, too, at Peace and Meredith Colleges. During her junior year, she met her future husband, Roy H. Park. Mr. Park had just graduated from North Carolina State University, and the couple met on a blind date set up by her cousin.

The couple married in 1936 and moved to Ithaca eight years later. The Parks came to Ithaca for his work: he had acquired an advertising agency in town. The agency became the first of many business ventures. He founded Hines-Park Foods with Duncan Hines, a restaurant and hotel critic, selling the business to Procter & Gamble in 1957. Mr. Park served as a senior executive with P&G until 1962 — the year he bought his first television station.

Though it was simply a business opportunity that brought the Parks to Ithaca, the couple — and their children, Roy Jr. and Adelaide — quickly became a part of the fabric of the community.

Roy Park Sr. joined IC’s board of trustees in 1973 and served as chairman from 1982 to 1993. Today, Adelaide continues that legacy of service. She’s been on the board since 1996 and worked with her mother closely on the business school building project.

“When the [Park] Foundation was funded by my father’s estate, [my mother and I] discovered that we shared many of the same values,” Adelaide says. “We focused the foundation’s efforts on education, media, environment, health, community needs, and animal welfare.”

At IC, that focus is reflected in the faces of the Park scholars, nearly 300 students and alumni who have been awarded full scholarships since the program started in 1997; onscreen at the Finger Lakes Environmental Film Festival; in the work done by Project Look Sharp, the college’s media literacy initiative; and in the work of the Park Center for Independent Media, which studies media outlets that reside outside of traditional corporate systems.

Diane Gayeski ’74, dean of the Roy H. Park School of Communications, met Mrs. Park at a celebration of the 10th anniversary of the Park Scholar Program.

“She was the most charming and inspiring person, and she was clearly someone who got a great deal of pleasure out of seeing young people pursue their education and their career dreams,” Gayeski said in the Ithacan on June 23, 2016. “She was the kind of person in conversation who was very observant of others and always found ways to compliment and encourage them. I saw that through both her social interactions with students at that dinner and with her legacy of giving to Ithaca College.”

“If it were not for her abiding interest in health, the community would never have had the Ithaca Free Clinic,” Adelaide adds. “Some of her lesser known philanthropic efforts were creating a fluoride-free water system in Ithaca, fighting the use of pesticides, and providing facial reconstruction for accident victims and people born with facial impairments.”

“In fact, a rescued chipmunk, which she named Chippy, resided in her kitchen in a hamster cage,” Adelaide recalls. “When it died, at a much-advanced age for a chipmunk, she took it up to Cornell to have it autopsied. [Chippy’s running] wheel was squeaky — it ran constantly and drove everyone crazy. [So, despite Chippy’s much advanced age] she expected foul play.”

Adelaide describes her mother as having an incredibly sharp wit and an extraordinary sense of humor. Mrs. Park was also a “breathtaking beauty,” who, as a college student, was crowned May Queen and the North Carolina Cotton Ball Princess.

“Coming from a comfortable, privileged conservative Southern background, it is remarkable that my mother evolved into an environmentally and socially conscious visionary,” Adelaide says. “Her commitment to a healthier, more fully informed populous and to creating a more sustainable and just world will endure both locally and nationally. Her life made a huge difference, and she will be sorely missed.” 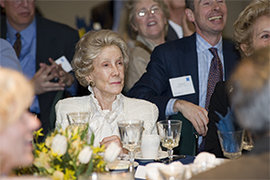 Established in 1997, the Park Scholar Program at Ithaca College awards merit-based scholarships to at least 10 high school seniors each year. Once entering the program, Park Scholars are expected to: