In September, the academic quad was in its full glory, with bright blue skies, green grass, lively gatherings at Dillingham fountain, trees in full leaf—and 300 empty chairs. These pieces set the stage for a commemoration of lives cut short by suicide.

The 300 chairs set up on the College quad were organized by the Counseling Center to promote suicide awareness. In the United States, suicide is the third leading cause of death for people age 15 to 24. Nearly 1,100 college students commit suicide each year.

LeBron Rankins, an on-campus psychologist and director of the College’s Suicide Awareness and Prevention Program, worked with the Suicide Prevention and Crisis Service (SPCS) downtown on the exhibit.

“You couldn’t miss our display,” says Rankins. “It was right out on the quad. It drew people in and delivered a message. [Suicide] is a reality we need to learn more about, and it’s not talked about often. I can do all I want to help here on campus, but if the community isn’t aware, then it’s a disservice.”

The Counseling Center’s demonstration was an extension of the traveling “Empty Chairs Project: Loss After Suicide” exhibit created by SPCS. The downtown exhibit, held at a local gallery, included empty chairs that were decorated by local artists who lost a loved one to suicide. The project was coordinated by Lee-Ellen Marvin, an adjunct professor at the College and director of interactive theater at SCPS. The installation is currently circulating around Tompkins County.

“Our mission was to create visible and meaningful symbols that encompass the pain felt after suicide loss,” Marvin says, adding that she and her team hoped the exhibit would provoke dialogue.

The exhibit downtown was also a celebration of SPCS’40th anniversary of providing help to the community, especially through their 24/7 volunteer-based suicide hotline. Marvin says SPCS hopes to keep the exhibit circulating for the next two years.

“[The response] was tremendous,” Marvin says. “It drew in people who had experienced loss and needed to turn to friends.”

The project is not only a reminder but also an awareness tool that the Counseling Center hopes will bring in more students who want to seek help. Eleven percent of more than 600 Ithaca College students surveyed last spring reported that they have seriously considered suicide. Rankins says this figure has stayed pretty consistent year after year.

“We’ve had suicide here on campus, and we will again,” he says. “We know it’s preventable. We know we can’t eradicate it, but if we can prevent just one more death, it’s worth it.” 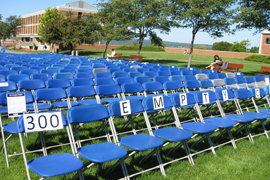 Three hundred empty chairs were set up on the academic quad to represent suicide loss.