By Nichole Bazemore ’94, who graduated with a degree in television-radio and is blissfully single

If you’re looking to meet the love of your life, odds are that you’ll need look no further than your computer, iPad, or mobile device. That’s because, according to recent statistics, more than 120 million people are registered on an estimated 13,000 websites, all looking for some type of companionship or romantic partnership through which they can find happiness.

According to the popular dating site Match.com, one in five relationships now starts online. Match’s competitor, eHarmony, claims to be responsible for 542 marriages a day. Take those numbers and factor in all the gushy video testimonials of happy couples who found love online and the endorsements of media personalities like Dr. Phil, and you might be hard-pressed to find reasons not to try to get in on the action.

At least, that’s what I thought when I tried online dating years ago, in 2005. I was in my early 30s, with a rewarding career, good friends, and an interesting life, but I couldn’t ignore the one, glaring fact that something was missing, namely, someone special to share it all with. So, my friend and I made a deal. We would try Match.com for three months to have some fun and see if we could attract Prince Charming into our lives from one of the far corners of the Internet.

My experience was better than I’d expected. With the exception of one phone-based relationship with a man in another state that never culminated in our meeting face-to-face (I later came to suspect he was married), I did meet and have several dates with funny, interesting, smart men—men I wouldn’t have met in my limited, too-familiar social circle. For me, online dating provided easy access to men who had similar interests, tastes, life experiences, and desires and gave me hope that Mr. Right, elusive though he was, did in fact exist. Although neither my friend nor I met our Prince Charming, all the testimonials couldn’t be wrong.

We wondered then, as I still do now: is it possible to find true love and real happiness online?

KATIE’S STORY
Katie Centrella ’04 is proof that you can. Centrella was actually on her honeymoon when she answered our online query for IC alumni who had positive cyberdating stories. Like many young women, Centrella always believed her true love was out there somewhere. She just didn’t know that, while she pored over her studies on South Hill, her would-be life partner was doing the same at Cornell. Nor did she know that it would take an online dating site to bring them together.

Centrella says she initiated contact with her now-husband because his profile said he’d graduated from Cornell. “I think he still has that first e-mail where I asked him if he ever went wine tasting or visited the many falls in Ithaca. Even though we were in Ithaca for college during the same four years and never met, it was Ithaca that ultimately made me take the leap that brought us together,” Centrella says.

VIEW FROM AN EXPERT
Online dating also brought several of Centrella’s friends and their mates together, and studies show they’re in good company. Once thought to be the “last resort” for people who couldn’t find lasting relationships elsewhere, online dating is growing in popularity. “Online dating has become mainstream. Almost everyone knows someone who met their spouse online,” says Julie Spira ’79, online dating expert and best-selling author of The Perils of Cyber-Dating: Confessions of a Hopeful Romantic Looking for Love Online.

Internet dating is also big business. According to media research company IBISWorld, online dating is the second largest Internet industry, pulling in an estimated $1.9 billion in profits in 2010. One of the biggest contributors to the growth of online dating? Baby boomers. In fact, they’re among the fastest-growing demographic in that Internet space. According to eHarmony.com, an estimated 30 percent of America’s 80 million baby boomers are single, and they account for about 20 percent of all online daters. “It’s huge,” says Spira. “People are getting divorced, their kids are in college, and no one is fixing them up. A lot of people in this group don’t want to get married again, but they want to date and enjoy life. They get to meet the kind of people they would be compatible with and enjoy their company,” she says.

LAUREN’S STORY
Thanks to the advent of niche sites, those looking for love online can meet people of the same race, sexual orientation, religion, and nearly everything else imaginable. Although Lauren Steinberg ’06 tried Match.com, she found one niche site, JDate.com, especially appealing. “I’m culturally Jewish, [which is] why I tried JDate, but [I’m] not closed to dating other people. I wanted to meet someone I ultimately could end up having a relationship with,” she says.

Although Steinberg met and dated several nice men on the website, at least one of her experiences was less than favorable. “We started chatting online that day, and within five minutes ‘Greg’ said he had to go but that we should meet for a drink at eight o’clock that night. The red flag was already there because he wanted to meet within five minutes, but I ignored it,” she says. Steinberg met her date at the bar only to discover, over the course of the night, that he had invited five other women to the bar on a bet with friends that he could get them all to show up at the same bar on the same night.

AN EXPERT’S ADVICE
Julie Spira, who details her own online dating debacles in her book, also recalls a time when she learned her lover’s secret—that he was married. “He lived in New York, and I lived in L.A.,” she says. “Because he lived somewhere else, it was easy to disguise what he was doing. He was initiating all the calls, but something was ‘off.’ He was naming our kids, planning our future,” she remembers. One day, the man rushed back to New York from L.A. because of a family accident. When Spira called the man’s mother to ask how the family was doing, she learned the truth. “I introduced myself as his girlfriend, and his mother said, ‘What? He has a wife!’”

But that one painful encounter wasn’t enough to deter Spira from cyberdating. A self-professed “hopeful romantic” who says she believes in love at first sight, Spira understands how to navigate the online dating terrain better than just about anyone. The former technology executive, whose hectic schedule often prevented her from dating offline, created her first online profile in 1994. After going out on several successful dates, friends began recruiting her to write their online profiles.

Fast-forward 18 years, 250 online dates, four marriage proposals—and one marriage later—Spira today considers herself America’s cyberdating expert. Her online dating advice has appeared in hundreds of media outlets, including Men’s Health, the New York Times, and the Huffington Post. Through her company, she coaches clients to their own online dating success. Spira says that, although you should expect hiccups along the way, cyberdating can be fun and, like dating offline, involves taking risks. “It’s a game of pay to play. Try it. If it’s not for you, it’s okay. If you have one or two bad dates, it’s okay. Try it for three months,” she says.

“Cast a very wide net,” she says. “Not everyone you meet will be ‘the one.’ Think of it as expanding your social circle. You never know who you’ll meet, who can help you—maybe you’ll meet a new friend along the way.”

Steinberg, too, says despite her experience with guys like “Greg,” she’s hopeful and believes you can find love online, although she’s taking a break for now. “I still think it’s worth it to try. I think people need to put the time and effort into seriously talking with someone before meeting. Of course, I’m hopeful that someone is out there for me. I just don’t know where I’ll find him!” she says.

ONLINE DATING IN THE LGBT COMMUNITY
Luca Maurer, program director for IC’s Center for LGBT Education, Outreach, and Services, says there may be advantages to meeting potential love matches online. Online dating sites provide a perceived sense of control and may reduce the risk involved in approaching a potential love interest. “When you approach someone in person, you take the risk of getting a bad reaction, even getting punched in the face,” Maurer says.

In the 1920s and ’30s, the LGBT community used signs and symbols to communicate their sexuality, but today it’s much less straightforward. It’s not easy to determine someone’s sexual orientation using visual cues. And when a man approaches another man, the outcome can be violent. (Or he could lose his job. Some workplace policies and state legislation allow employers to fire people, even if they are simply thought to be gay.)

Online dating sites, and the Internet in general, can also help take away the sense of isolation many young LGBT people feel. “You may not be the only person in your town who’s LGBT, even though it may feel that way,” Maurer says. “Or, you can connect with someone in another town who is feeling just as isolated. Even if you don’t find a match, you might make an LGBT friend.”

In addition to niche dating sites, many of the large mainstream sites have options for users seeking someone of the same sex. This is helpful, Maurer says, because young people don’t identify themselves solely by their sexual orientation. They have a myriad of interests and traits that they use to identify themselves and that they might want to share with a prospective partner. 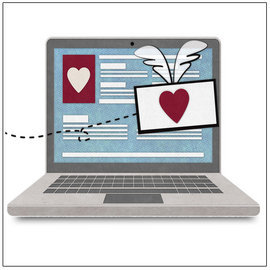 Sure, online dating is a game of chance, but let’s face it, so is offline dating. So, how can we increase our odds of finding our perfect match online? Cyber Dating Expert Julie Spira ’79 says to follow these few, simple tips.

When Writing Your Profile

When Going on Your First Date

Watch Out for These Red Flags