The first thing they dropped were the icons — golden, serene-eyed statues. They sat them on the road, under the shell-splintered trees, miles from where their village had stood. Others held on to the statues longer, but they were laid on rocks by the wayside.

The vendors tried to sell them at first, but then they threw them off the pathways. That’s how I learned most golden Buddha images were really painted ceramics — by the way they laid split across the fields, bone-white in the cold daylight. They laid everywhere — all across the rocky fields. Their mudra-twisted hands reached out from the rocks towards us. We left those bodhisattvas behind in the rotting Buddha fields. We were the same that way.

Then tapestries called thangkas were thrown away. They hung them on the trees we passed. The tapestries filled the trees, and between the branches the sky was filled with silk-flowing Buddhas. When the wind blew they twisted on scarlet cords, spinning in circles, tassel-legs twitching. The gold-embroidered icons stared at us.

Then the lay people threw away the texts — the long sheaths of rice paper. The young monks kept theirs in bags that weighed down their saffron cowled shoulders. The old monks muttered the prayers by memory. They breathed them to the rocky path: peace to all, freedom from the world they no longer looked at, casting eyes downward to the path. The mountains rose above us, their white peaks melting into the clouds.

Some tried to burn the papers respectfully: to give the prayers the impermanence they taught. Most threw them into the rocks. Those papers stayed. They littered the path ahead of us and miles behind us. When it snowed and rained hard the papers dampened and stuck to the path.

The paper became filmy and the ink bled into it. They didn’t last — nothing lasted, just like they predicted. When it rained like that it was ugly to see the impermanency sticking to our feet. That was the prayer, the chant everyone said and then didn’t say: nothing lasts. We heard it all the time, on the desolate mountain faces and the painted-on Eyes of the Buddha, which blessed the rock faces. They wept agreement in the rain.

When the sun came out the wind blew. The damp, prayer-mashed rocks dried. We were starting to move south and more to the west. The mountains had started to level out into dusty plains. When the wind blew, I watched the papers fly on the breeze, flitting past our sad line that trudged towards the brightness of the setting sun. 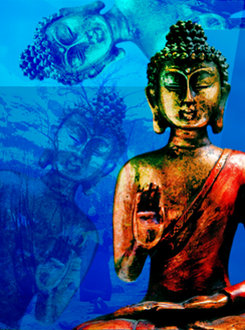 C.W. Accardo ’13 is a sophomore attending Ithaca College, where he majors in English and philosophy/religious studies. These interests are reflected in his work, which he says “often revolves around the emerging conflict between religion and the modern world, and how both change accordingly.”