More than 13 years ago, the events of September 11 rippled through the Ithaca College community. For Brian Johnson ’01, then a senior, a desire to help after that day changed the course of his career. Shortly before graduation, the health services administration student—who played on the college’s baseball and football teams—sought out a U.S. Navy recruiter at a career fair to talk about enlisting.

That’s how Johnson, with no flying experience, started on the path to piloting Sikorsky H-60 Seahawk helicopters. “It’s really challenging, but it’s rewarding,” he says from his current base in Coronado, California.

And varied. Over the years, Johnson has trained at bases across the country and traveled the world. “The opportunity to work with so many people and different military services and civilian contractors has been amazing,” says Johnson. “Everything changes every few years.”

The first two and a half years of Johnson’s career in the Navy were spent in officer candidate school and advanced flight training. His first assignment was as an aircraft commander, supporting Operation Iraqi Freedom and Operation Enduring Freedom in Afghanistan.

“Our missions were combat, search and rescue, antisurface warfare, and antisubmarine warfare,” he says. Later, as part of Operation New Dawn in Iraq, he was the officer in charge of a special operations command central detachment, providing support for troops on the ground.

Other missions have had an impact closer to home. When a heat wave and Santa Ana winds caused multiple wildfires in California’s San Diego County, firefighters called on Johnson and other Navy pilots to fly in with water to drop on the flames, halting the fires’ progress. “We spent the whole month of May just fighting fires,” says Johnson.

That experience had an effect on Johnson who’s considering his next adventure, which might be a re-up in the Navy or something else. “I just got a master’s in criminal justice,” he says. “So I might go into federal law enforcement. Or I might fight fires.” 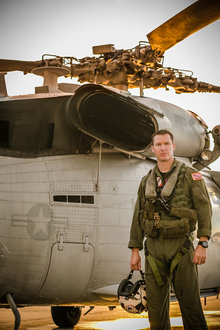 "We spent the whole month of May just fighting fires."