From Prospect to Alumna

This fall Molly Quinn ’12 achieved a unique trifecta: she ran as an alumna in IC’s annual opening cross country race after having competed in it as both a “will-be” and a student-athlete.

The Jannette Bonrouhi-Zakaim Memorial Alumni Cross Country Meet kicks off Ithaca’s cross country season each year and is open to three types of runners: current Bombers, alumni, and children of alumni who one day “will be” Bombers themselves. Quinn first ran the race in the late ’90s as one of the dozens of youngsters joining their parents in the annual alumni meet, which began as an informal event in the mid ’80s and became an official function in 1989. Her parents, Jim Quinn ’86 and Jill Loveless Quinn ’85, have been fixtures at the race since its inception.

A four-year member of the cross country and track and field teams, Quinn earned all-conference honors in both sports. Last May she graduated with a degree in physical therapy, and her first Labor Day weekend after graduating included the annual alumni meet.

Jim Nichols, men’s cross country coach since 1991, and Bill Ware, who coached Jim Quinn during his Bomber career, started the event tradition for the cross country programs. Now, 20 years later, they’ve seen the first person ever to participate as a member of all three groups. 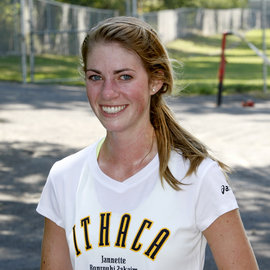 In 2000, the annual alumni meet was renamed in remembrance of Ithaca College Athletic Hall of Fame member Jannette Bonrouhi-Zakaim ’90, who passed away earlier in 2000. The endowed Jannette Bonrouhi-Zakaim Memorial Fund has raised more than $35,000 in the last 11 years. The annual interest from the fund offsets expenses for cross country’s alumni weekend and benefits the women\'s cross country program.