Anthony Wallace ’05 was working in the Collections Processing Unit at Smithsonian’s National Air and Space Museum in Washington, D.C., when he found out that the museum was going to restore an airplane just like the one his grandfather flew in during World War II. They planned to move the carrier-based dive-bomber, the Curtiss Helldiver, from storage to the museum’s restoration airport. He’d had his eye on that aircraft since he first toured the storage facility as a technician with his boss.

“I told him I’d move that Helldiver, and no one else would!” he said.

Wallace’s grandfather was a radio operator/gunner in the same aircraft model when he was an 18-year-old marine. So at Wallace’s first opportunity, he climbed into the back of the aircraft and called his grandfather, who recounted some of his memories of wartime.

A Love of History

A history major at Ithaca College, Wallace wrote every paper he could on military aviation. Coming from a family of avid aviators—in addition to his grandfather's experience, his brother is a pilot in the U.S. Air Force and his father has a private pilot's license—he flew through those history texts, carrying family stories with him all the way.

But Wallace never imagined how tactile those stories would eventually become. He now works out of a different kind of cockpit—a supervisor’s office at the National Air and Space Museum. As a collections manager, he’s responsible for preserving some of the museum’s over 60,000 aircrafts and artifacts.

Wallace’s career at the National Air and Space Museum began in March 2008 after he interned there three times and earned his master’s degree in museum studies at The George Washington University.

He began as a museum technician in the collections processing unit. The technicians perform most of the hands-on moving and reassembling of the collections with heavy machinery like forklifts, trailers, and cranes.

“I’d never driven a forklift or operated a crane or even welded metals in my life,” Wallace said. But at 24 years old, he started transporting collections with the best of the department’s technicians and specialists.

“Academic life had been theoretical course work for me,” Wallace explained. “I’d never had hands-on technical collection work before. Then suddenly I have a job where I get to touch everything the public can’t!” Sitting inside some of the aircraft he’d read about—including some of the Apollo spacecraft—was his dream come true.

After mastering the skills of a technician, he began to oversee his own projects as a museum specialist. With the Curtiss Helldiver project, Wallace was preserving more than just a museum artifact; he was also preserving a piece of his family’s history.

“We’re dealing with moving things that were never meant to last very long,” Wallace explained. “A lot of the materials used in our collections—original plastics and rubbers—have a functional life of maybe four years. And we have to keep them as long as possible.”

Now a supervisor, Wallace focuses on preservation concerns. He trains new technicians to ensure that artifacts arrive in their new locations in the same well-preserved condition they left.

Over the next seven years, the Air and Space Museum will begin an extensive renovation process. Environmental control upgrades that include changes to the heating and air conditioning systems will enhance the collections’ longevity. And Wallace will have a lot of artifact-moving projects to keep up with construction needs.

“We haven’t undertaken anything this large since the early 2000s when we built our second museum,” he explained. But for Wallace and his team of technicians and specialists, it’s all systems go. 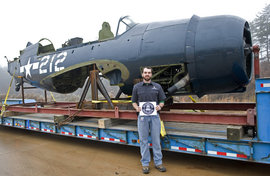 Anthony Wallace standing in front of a plane to be added to the Smithsonian's National Air and Space Museum. Photo submitted