In the absence of a national policy on climate change, IC steps up institutional efforts.  by Doug McInnis

As the planet heats up, a lot of people have waited for Washington to set an aggressive national policy to curb greenhouse gases. Ithaca College isn’t waiting—on the government or anyone else.

For years, a group of concerned campus community members have pushed to cut the College’s energy consumption as part of a campuswide environmental movement. While Ithaca’s efforts may seem small in light of the enormous problems posed by climate change, they are nonetheless important. Historically, change comes from small grassroots movements, such as the one the College has mounted, that then percolate upward and outward through society. Such movements led, for example, to the abolition of slavery, women’s suffrage, the 40-hour work week, civil rights, and other rights many people now take for granted. The effort to reverse global warming is no different, although time is very short.

“It is very, very important for institutions like Ithaca College to take the lead in the absence of a national policy,” says Sean Vormwald ’01, assistant director of alumni relations and environmental studies graduate of the College. And while he doesn’t discount the importance of international agreements and national legislation to cut greenhouse gas emissions, “the way to make an impact,” he says, “is on the local level.”

“Ithaca is doing a lot—more than many colleges,” Vormwald points out. “One reason is that we have faculty, staff, and administrators who get it. They realize that this is very important, not just for the larger picture of helping the planet, but also for [shorter-term] fiscal responsibility.”

Ithaca has certainly found that conserving resources saves money. As a student, David Ross ’04 examined the College’s electricity expenditure and found that the annual electric bill was more than $2 million. Saving electricity, when your bill is that high, means saving a lot of money. And as electric rates and raw material prices rocket upward, the savings are magnified.

Among other things, Ross found there was no metering for any but the newest campus building, which meant there was no way to track (and no one could be held accountable for) wasted power. As a result of the Ross study, the College has installed more meters, put compact fluorescent lighting in many buildings, added a digital control system for outdoor lighting, and curtailed lighting in the library where it wasn’t needed. The savings from those changes and other measures now run into the tens of thousands of dollars a year.

Vormwald stresses that neither instant cost saving nor short-term financial return is a primary reason for becoming smarter consumers of energy and stewards of the environment.  “It’s not just about the money,” he says. “It’s about the environmental impact. There could be things we would do that either don’t provide a fi­nancial return or take a long time to pay back.”This magazine’s readers know that the College’s efforts include the purchase of two hybrid cars, campuswide recycling that has been in place for a decade, a shift to the mandated use of recycled office paper, and a nationally recognized composting program. The abovementioned campuswide electri­city savings initiative and the addition of two electric utility vehicles are newer initiatives.

And this winter President Peggy R. Williams signed a letter of intent to become a signatory to the American College and University Presidents Climate Commitment. The letter is the first step in a process that will reduce and ultimately neutralize campus greenhouse gas emissions. As a leader in campus sustainability efforts, Ithaca was invited to become a charter signatory to the commitment.

The biggest single project at the College is the construction of a new building for the business school, which is incorporating sustainability education throughout its curriculum. The structure is believed to be the first business school building in the country that will adhere to the LEED platinum standard—the highest environmental standard of the U.S. Green Building Council. The building is designed to incorporate passive solar heating, maximize natural lighting, minimize electricity use, and recycle water. The project will assure that future business leaders from the College will be educated in a building that exposes them to environmental values.

Vormwald is only one of many at Ithaca who have pushed pro-environmental measures. He began his efforts as an undergraduate when he worked with the administration to craft a comprehensive environ­mental plan setting goals for managing solid waste and slashing energy use. As an undergraduate he also attended the annual UN climate conference at the Hague, Netherlands. Later, when he returned to work for the College in his present position with alumni relations, he reasoned that other students might benefit from the same kind of experience. So Ithaca applied for and was granted observer status to attend future conferences. In 2005 Ithaca sent 20 students and 4 members of the faculty and staff (including Vormwald) to the UN Framework Convention on Climate Change in Montreal. And in November 2006 Vormwald and retired IC anthropology professor Garry Thomas attended the convention, held this time in Kenya.

The View from Nairobi
The purpose of these conventions is twofold—to track worldwide progress toward meeting the goals of the UN’s Kyoto Protocol for curbing greenhouse gas output and to consider steps that can be taken toward future climate agreements. All told, 166 nations have signed on to Kyoto’s modest goal to collectively cut greenhouse gas emissions 5 percent from 1990 levels by 2012.(The United States, despite being the world’s biggest producer of greenhouse gases, has not signed.)

However, in light of recent climate change reports, Kyoto’s initial goals are far from sufficient to halt global climate change. A report this year from an international coalition of scientists (see graphic, below) warned that the world is already in for drastic warming, changing weather patterns, and rising sea levels as a result of existing greenhouse gas buildup. But reaching an international accord that goes beyond the goals of Kyoto is problematic, as the Nairobi conference illustrated.

Soon after he arrived, Thomas got a dose of reality when a Kenyan friend remarked, “The delegates will be here to move commas around. And no one will be here to save the world.” Soon, Thomas reports, it was apparent why his friend was so cynical. Early on, the small Pacific Island nation of Tuvalo wanted to add an agenda item on behalf of all small island nations. These tiny water-locked nations are particularly vulnerable to the impacts of climate change even though they generate the fewest green­house gases themselves; they may well be completely submerged as sea levels rise and fierce storms and hurricanes become more frequent. But the United States objected to the agenda addition. Then Jamaica pointed out that Tu­valo didn’t speak for all island nations and proceeded to back the U.S. objection. Since there was no consensus on the matter, the U.S. opinion stood. Tuvalo and other small islands were shut out.

As the conference continued there was more of the same. The event ran from November 6 through 17. Thousands of people consumed a great deal of fossil fuel to get there, and in the end almost nothing happened, as Thomas observed in his blog: “The few agreements that came out of this conference represent modest progress, much too little to justify the huge carbon [output] generated by the 6,000 attendees.”

On the last day, at a press briefing, Thomas recorded the biting sarcasm of a Kenyan woman who had seen enough. “I will leave you tomorrow, you in your suits, and go back to my (Masai) people,” she said. “They will ask me what was accomplished at these meetings. I will tell them, ’Practically nothing.’ ” Then she added, “We don’t drive 4-by-4 cars, we don’t go on vacation by airplane, but we do suffer from climate change.”

Back in Ithaca
The Nairobi conference might be reason for discouragement, but it isn’t the whole story. Even without progress at Nairobi, the nations that signed the Kyoto accord are busy cutting greenhouse emissions. And so, too, are people, institutions, and businesses in the United States, despite their government’s unwillingness to take serious action.

“Basically, people are doing the deed in the absence of (federal) support,” says Marian Brown ’95, IC special assistant to the provost. “There is enough of a grass roots effort to make a difference even if the federal government doesn’t get fully behind environmental issues.”

Her own job is a case in point. She works on special projects, the biggest one being the effort to promote environmental sustainability throughout the campus. Beyond Ithaca, she sees progress on a na­tional scale, including a move by Wal-Mart, the world’s largest corporation, to save energy within the company and push energy-saving products in its stores. “If someone like Wal-Mart gets behind this,” she points out, “it will have a transformative impact on its supply chain and customer base.”

She also cites the unlikely success of Al Gore’s documentary An Inconvenient Truth, which focused on the dangers of climate change. “It was standing-room-only for the film,” she says. “People are hungry to know the truth.

“You would expect that something as daunting as climate change would cause people to shut down. They tuned out the AIDS crisis because it seemed so overwhelming. But this crisis has engaged people.”

One reason is that the first impacts of climate change are already upon us—a thawing at the top of the world, lethal Euro­pean heat waves, drought in the American West, and a devastating 2005 hurricane season in the Gulf of Mexico. “There is no area of the country or the world that has not experienced some unusual weather pattern,” says Brown. “In Ithaca we have gone through the winter that barely was. We had a green Christmas. We had two warm weeks in January. That is unheard of.”

So Ithaca plugs away at the problem even though many of its environmental initiatives aren’t covered by grants or special donations to the College. “It sometimes takes a redirection of existing College resources, but we do it because we feel it’s important,” says Brown. “A more environmentally-educated student means a more educated workforce when they hit the streets after graduation. They will be a more engaged and equipped group when they get out of school and assume leadership positions that affect all of us.”

“Wangari Maathai, founder of the Green Belt Movement in Kenya, for which she was awarded the Nobel Peace Prize in 2004, was also featured. . . . She is now Kenya’s Deputy Minister for Natural Resources and the Environment and had recently published a memoir, Unbowed. . . . She is a down-to-earth person, with a warm smile, and was the only delegate of any prominence to note that the carbon footprint of the conference was anything to be concerned about.” 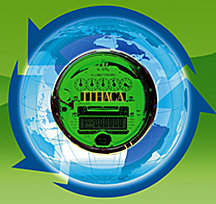 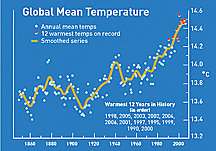 At continental, regional, and ocean basin scales, numerous long-term changes in climate have been observed,
in­cluding:

Other Changes in Extreme Events

Continued greenhouse gas emissions at current rates would cause further warming and induce many changes in global climate during the 21st century, very likely larger than those of the 20th.