Daring to Write: Contemporary Narratives by Dominican Women is a collection of essays, memoirs, short stories, and novel excerpts by 25 Dominican women and women of Dominican descent living in the United States. Some of the writers are more established, while others are emerging writers, some of whose work appears in English for the first time in the book.

Martínez’s work with female actors and writers led her to focus on Dominican women for the book. She organized the anthology into four different but interconnected themes: love, identity, gender, and migration.

Daisy Hernández, coeditor of another anthology titled Colonize This! Young Women of Color on Today’s Feminism, describes the book as “a moving and imaginative critique of how gender, race, and class intersect in the daily lives of women in the Dominican Republic and in the diaspora.”

Martínez works with the National Writing Project in New Hampshire and has received a Fulbright Fellowship and a Hedgebrook Writing Residency. She has also taught creative writing in the Dominican Republic. 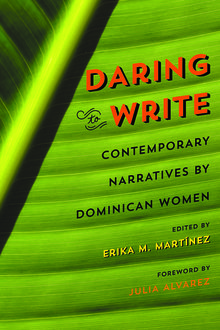