Coworkers of Gino Bona ’95 describe him as “fearless,” “tenacious,” and “audacious.” Gino once landed a job with ESPN.com by sending a T-shirt with his face on it to the site’s editor. Once he flew 3,000 miles to deliver someone a pizza. And this past football season he masterminded the winning idea for the NFL’s “Pitch us Your Idea for the Best NLF Super Bowl Commercial Ever. Seriously” contest.

The television-radio graduate works as the director of business development at Garrand Marketing Communications, an advertising agency in Portland, Maine. In November Gino presented a 90-second pitch to a panel of judges; his “So Hard to Say Goodbye” idea, about the devastation of football fans when the season ends, won him a trip to Los Angeles to discuss production with the NFL’s advertising agency and legendary commercial director, Joe Pytka.

Knowing he has always had a “crazy streak,” Gino’s family and friends weren’t surprised at his decision to compete. “When I told them that I was entering the NFL contest, most of them just shook their heads with a smile,” says Gino. “As my wife, Stephanie, put it, ‘Here we go again.’ ”

Since his win, Gino has enjoyed a few celebrity perks. He hung out with Buffalo Bills head coach Dick Jauron, and Katie Couric invited him to sit in her luxury suite to watch the Super Bowl XLI game. And although he has achieved national and local media attention for his commercial concept, he says his career has been pretty much unchanged.

“The only difference now is that some companies are calling us asking to meet instead of me begging for meetings with them,” says Gino. “And I also get recognized around town and get a free Dunkin’ Donuts coffee or a Big Gulp here and there.” 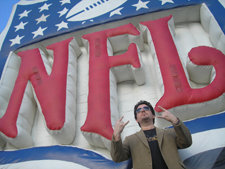 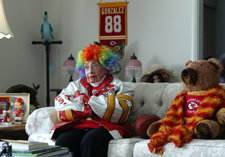