“You learn about international affairs, specifics of different countries, the United Nations, and different types of governance,” says Nellie de Goguel ’10. “You learn and improve negotiating skills and speaking skills, and to work with people you’ve never met to achieve a common goal. And you learn how to compromise.”

De Goguel is speaking of her experience as a member of Ithaca College’s Model United Nations team. IC has participated in the largest and oldest Model UN conference, held at Harvard University every February, for more than two decades.

Model UN educates students about civics, communication, global politics, and diplomacy. At conferences, each team takes on the role of UN delegates from a member country and participates in sessions
that mimic those of real United Nations committees.

“Each country (team) comes with goals and solutions to problems they would like to see included in a final resolution,” explains this year’s co-head delegate (with history major Greg Peterson ’09) Kendra Sundal ’09, a politics major, “but the resolutions need widespread support to pass. The process is about negotiation and compromise, general­ly with a few countries leading a group in writing different points into the resolution.”

Such conferences began in the 1920s, when college students participated in simulations of the League of Nations. Both the Harvard National Model UN and the National Model United Nations in New York began then. Today, more than 400,000 students from middle school through university level participate annually in various Model UN classes, clubs, and conferences.

De Goguel joined the IC team as a fresh­man. She and her teammates work hard to prepare and present at the conference, but they also enjoy themselves. “After conference every night,” she says, “we meet with Marty, and each team member tells [him] about what’s happened. It’s great fun.”

Marty Brownstein, who began teaching politics at Ithaca College in 1970, has served as adviser for IC MUN since its inception in 1983, when it was a club funded by the Student Government Association. In the late 1980s it moved into the aca­demic sector as a “team” and is now under the auspices of the dean of humanities and sciences.

At conferences, delegations win awards on different levels, based on their performance in committees. But, Brownstein points out, the IC participants don’t go to conferences to win awards. “IC does extremely well every year, but we haven’t gotten too many awards lately,” Brownstein says. “We look at delegates’ sense of talking to each other, their contributions to their committees, and how well they speak.”

Brownstein will retire next year, and his politics colleague Juan Arroyo, currently coadviser, will take over. Brownstein regards Model UN as his major project at IC, and he thinks there can’t be many organizations that generate as much loyalty as it does.

Will Rubenstein ’94 agrees. Owner and director of Camp Wingate Kirkland on Cape Cod with his wife, Sandy Bogdanoff Rubenstein ’95, Rubenstein was an MUN team member at IC. He says Model UN is one of the most significant experiences Ithaca offers. “You learn a lot about teamwork and communication,” he says, “and learn from peers outside your [own institution].”

Rubenstein credits Brownstein with mak­ing the experience significant. “Marty is an inspirational teacher and guide,” he says. “He’s a great magnet for people to come together. It’s a tribute to Marty that Model UN has stayed strong all these years.”

Rubenstein keeps in touch with Brownstein. The two dined in Boston with an­other former Model UN team member, Matthew Groner ’95, in February, while this year’s team was at the Harvard conference. (In 1994 the two alumni served together on the MUN Security Council for Spain — which that year was a real UN Security Council nonpermanent member.)

Around 1995, IC team members realized they were working prodigiously for just the two-day Harvard conference, so they decided they would also attend the MUN conference held each fall at the University of Pennsylvania. That tradition continues.

In a typical MUN conference, two team members are assigned to a committee (such as Disarmament and International Security or Legal), which researches specific topics under its jurisdiction. IC committee members work with students from other schools, who are acting as other countries, to negotiate resolutions and achieve a common goal. To be sure all team members are on the right track, IC’s advisers and head delegates check in nightly with each of them.

This year, 24 IC delegates began research in December for the Harvard conference, at which they represented Italy — just as the very first IC MUN team had done more than two decades earlier. “You sometimes battle with people,” explains de Goguel, because each “country” has its own agenda. “Ithaca has always had a good reputation of working well with everybody.”

There are reasons for that stellar repu­tation. The team recruits freshmen, to encourage a continuing knowledge of the inner workings of Model UN and to give students a chance to improve each year. “Four-year members who enter as first-year students and whose loyalty and devotion become long-term resources,” points out Brownstein, “add to our team’s advantages. We are favored by our selectivity, the frequency of our meetings, and the profound trust that builds [within our team] over every annual cycle.”

The team prepares intensely before conferences, with two meetings a week and mock debates on Sundays. Some students are better at networking, others at public speaking, so the strategic pairing of members is another reason IC has historically done well in conferences. Another part of the IC strategy is that the team generally tries to work with the delegations of smaller countries first, and then seeks the support of larger teams such as the United Kingdom and the United States.

Sundal explains, using the example of her ultimate experience at Harvard this year: “By the end of the weekend, we [could] easily measure our success in terms of how much we’d gained academically, as well as how well we’d managed to maneuver diplomatic negotiations. Many of us contributed clauses to resolutions that were passed, and some of us were at the forefront of resolutions that didn’t pass but were strong contenders. We gained respect from large Ivy League and international schools’ delegations for our work on joint resolutions, and we came away with a strong sense of pride in our efforts and our team. We grew closer as teammates, and that in itself is a success.”

Brownstein concurs with Sundal’s assessment of the IC team’s role in the international forum. He sits on a panel of veteran faculty advisers who counsel their less experienced counterparts. “People listen to us,” he says, “because of all the ways we present ourselves strongly. I’m delighted to be part of this panel, because it advertises our senior status and my 27 years of doing this. The conference knows we’re reliable.”

Co-head delegate Peterson believes the time and effort spent on Model UN is well repaid. “Model UN is academically challenging,” he says. “We spend most of the year preparing. Then we go to only two conferences a year, only a couple of days in length. But they’re worth it. All this work you’ve done over months and months [gets] put to action with people from all across the country, sometimes the world.”

De Goguel gives credit to the professor who has made Model UN his project for more than a quarter century. “Marty’s like the grandfather of our club,” she says. “He knows [Model UN] in and out. And his passion gets completely transferred to us.”

Although Brownstein and Arroyo do a lot of behind-the-scenes work such as organizing hotels and conference attendance, they leave the hardest work to the students — planning and running meetings and helping new members prepare for conferences. That experience pays off later.

During his years on Model UN at IC, camp owner and operator Rubenstein learned how to work with a team to research and communicate the IC country’s position, and to think and react on the spot. “I use the lessons from Model UN,” he says, “as I think about communication and teamwork in our business. Those two issues are the number one reason that we have a high retention rate of both our seasonal and full-time camp employees.”

De Goguel doesn’t yet know her post-graduation plans, but she’s more excited than nervous. “My Model UN experience will help me, no matter what I choose to do in life,” she says. “The skills are applicable in any field, in any job. World knowledge, confidence in yourself, being able to work peacefully with people — these are universal skills that will better prepare anyone to deal with life outside college.”

The team has expanded over the years, with a growing number of applicants. There are now 26 members; 24 go to Harvard, 12 to Penn. Great care goes into choosing members, and the application process is rigorous.

Last September, co-head delegates Peterson and Sundal selected the members of the 2009–10 Model UN team. Over 10 days, each applicant interviewed with six or seven delegates and at least one faculty member. The leaders generally prefer people with some knowledge of international affairs, but it’s not absolutely necessary at first. “We’ve taken chemistry majors, people who have public speaking or debate skills, [and people with] a general passion to learn,” Peterson says.

Adds Brownstein: “We certainly look for world knowledge and scholastic achievement, but we also look for interest, liveliness of presentation, and general vivacity — pizzazz.” 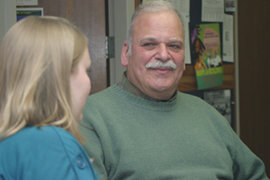