Tom Everett is grateful for his life in music — as are his listeners.    by Kathryn Good-Schiff

Tom Everett feels about his job the way everybody wants to feel about theirs: “I do what I love to do,” he says. As Harvard University’s director of bands since 1971 and founder of its jazz program, Tom also advises the marching band and founded and directs the jazz band, summer pops band, and wind ensemble. His love of music is total; when he’s not working, he listens to music “all the time.”

Tom graduated from IC with two degrees in music education and two new loves: jazz and the bass trombone. A trumpet player in high school, he switched instruments after he heard a recording by George Roberts (“Mr. Bass Trombone”) and found he loved that sound most.

There were few recital pieces available, since bass trombone is less commonly played than tenor, so early on he was inspired in a quest for new literature — a quest that has lasted many years. Tom eventually premiered more than 30 works for solo bass trombone or bass trombone in chamber music, many of which he commissioned.

Tom was introduced to jazz at Ithaca when he joined a fledgling band led by his classmate Bob Levy (“Ear Candy,” ICQ 2006/4). “Playing jazz changed the way I thought about art,” Tom says. “The performer must also be a composer. It’s extremely personal.” Attending shows by Miles Davis, Bill Evans, and other legends inspired Tom’s desire to “pass on the excitement and love [of jazz] to the next generation.”

And that is just what he does in his multiple roles at the venerable institution in Cambridge. “Tom single-handedly brought the field of jazz to Harvard,” says Cathy McCormick, director of programs at the university’s Office for the Arts. Tom based the curriculum around works by Duke Ellington (who, Tom says, “influenced everyone who has played since”) and Charles Mingus (who “summed up all who preceded him”).

“It’s a challenge for students to get inside jazz,” Tom points out. “It requires soloists to take risks and be creative on the spot.”

Not content with just a jazz program, Tom also created Harvard’s wind ensemble as a venue for bringing to a wide audience other forms of contemporary American music that he loves: classical, pop, folk, and music by composers who “fall between the cracks” because their work is not easily categorized. A favorite of Tom’s is Alec Wilder, an unclassifiable and brilliant eccentric he met through Bob Levy.

Tom strives to create opportunities for instrumental playing; this led to his establishing the Harvard Summer Pops Band, open to anyone, which gives a concert in Boston’s Hatch Shell every August. In 1979 a flutist named Betsy Broceck joined the band. Five years later she married Tom. “Wonderful things came to my life through music,” Tom smiles.

Tom happily portrays himself as a jack-of-all-trades: “I conduct, teach, promote, and play. There is the danger of spreading yourself too thin, but if I do any of these things well, it’s because I do them all. Each activity informs and enriches the others.” Levy says he knows “very few who have devoted their lives to a program as [Tom] has done.” McCormick calls him “Harvard’s Music Man.”

Before conducting replaced the bass trombone as his main artistic activity, Tom played with the Bolshoi Ballet, Boston Pops, Portland Symphony, and the bands of Tommy Dorsey, Dizzy Gillespie, and Ray Charles. He conducted on J. J. Johnson’s The Brass Orchestra (Verve), which was nominated for three Grammys. The Hungarian government awarded him an Artujus for playing and conducting Hungarian music, and he conducted the Army Band of the People’s Republic of Hungary in a program of American music.

Masters inspired Tom to learn and to pass along his encyclopedic knowledge. Among them were Ithaca College professors Warren Benson (percussion), Robert Prins (brass), and Donald Sinta (saxophone), whom he calls “innovators in contemporary music.” Tom deeply appreciated their generosity. “I hung on their every word,” he says. It’s easy to imagine his own students saying the same about him.

Tom,
I remember hearing you practice your trumpet down the street in the summer everyday, flipping baseball cards off the curb with you, filling the plastic pool in your back yard with water toy, soldiers and diving spacemen from the Kellogg's cereal boxes and letting our pet turtles swim through it all. How I looked forward, for years to go to band camp with you and our fearless leader Mr. Bill Dwyer. I practiced my clarinet(some) marched in many parades, played a slew of concerts and got on the radio once... love Ellington, and Waller and Sousa got to shake hands with Dave Brubeck, B.B. King and Winton Marcellus, play jazz on street corners... Rhapsody in Blue in narrow canyons that remind me of downtown NYC, but never got to tell Mr. Dyer that he was the most influential person in my life. In 1988 brother Fred and I took mom to Radcliff for her 65th class reunion. How proudly she spoke of Tom Everett being the Director of Music at Harvard. I'm sure you have favorably influenced many in your life.
Sorry I crashed your bicycle on Moore Street in the 50's. Now I understand that it is through education and cooperation we best achieve our goals in society. Most of all I remember learning to read with the Donald Duck comic books you gave me.
Won't you send me an e-mail or give me a call?
Life is better for knowing you. Thank you for being my friend.
RJ Muhlheim 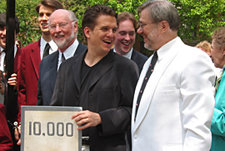 Harvard bands conductor Tom Everett, at left, with John Williams, conductor emeritus of the Boston Pops Orchestra, and Keith Lockhart, current conductor of the Boston Pops, at the 2003 dedication of Leroy Anderson Square in Cambridge, Massachusetts. Anderson’s music has had a long association with both ensembles.