Sally Jane Ketcham Tanzer ’70  honors the teachers of whom she thought the world. by Kate Larrabee

Sally Jane Ketcham Tanzer says the strong reputation of Ithaca’s music education program preceded her when it came time to interview for teaching positions. “Ithaca really prepared me to walk into an interview and be proud of my alma mater,” she says. “People knew the quality of the program.”

Tanzer has recently retired after almost 40 years teaching music — from kindergarten through college. She was most recently the choral director for Hillsborough Community College in Tampa, Florida.

Ithaca’s faculty members “deeply cared about the students they were putting forth,” Tanzer says. Gregg Smith, who directed the Ithaca College Chorus, “is very famous in the choral music family around the world,” she says. “And I thought the world of [professor emerita] Helene Wickstrom [’38, M.S. ’61] and [retired professor of music] Mary Arlin [’62]. Retired associate professor of music] Roland Bentley was also excellent.”

Tanzer says that as a student, she thought she understood music theory, but “when I finally had Mary Arlin for theory, she straightened me out.”

Tanzer and her senior year roommate from Ithaca, Lynn Love Liepertz ’70, have stayed in touch since graduation, and their husbands have become good friends over the years. “We take at least one vacation together each year, and our daughters were in each other’s weddings,” she says. This summer, she and Lynn and their husbands took a trip together to Europe.

Tanzer and her husband, Jed, have made a $50,000 commitment to the Sally Jane Ketcham Tanzer ’70 Music Scholarship, which will be awarded to outstanding students majoring in music with demonstrated financial need. The couple has also made an equal commitment to SUNY Oneonta, Jed’s alma mater. “We credit equally our institutions for providing the education that gave us the means to give back,” Tanzer says.

The Tanzers have also included Ithaca College in their estate plans, making Ithaca and SUNY Oneonta equal beneficiaries of a life insurance policy that would provide income in the event of both of their deaths. The policy was relatively inexpensive, Tanzer says, “but we thought: This is a way we can give back — eventually.”

Did a wonderful teacher or mentor at Ithaca College make a world of difference in your life? If so, perhaps, like Jed and Sally Jane Ketcham Tanzer ’70, you’d like to honor that special person by starting or contributing to a scholarship. Visit the campaign site and click on “Give to Campaign” at the left; choose “Student Scholarship Aid” as your contribution priority. 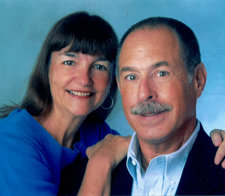