RESTAURANT CHAIN NATHAN’S FAMOUS IS RENOWNED FOR ITS HOT DOGS, but William “Bill” Handwerker ’76—grandson of company founders Nathan and Ida—didn’t dare call that food by its popular name when he was growing up. “I still say ‘frankfurter’ because my grandfather taught me as a young child never to call it a hot dog,” Handwerker says. “He’d tell me, ‘Hot dogs are made from inferior meats.’ A frankfurter, a Nathan’s frank, is made from all beef and seasoning.” If I said ‘hot dog,’ it was like a four-letter word.”

About a century ago, the public shared Nathan’s perception that ‘hot dogs’ were of suspect quality. So when Handwerker’s grandfather opened Nathan’s Famous, he also hired college students to visit his stand wearing white lab coats and stethoscopes, and eat his franks.

“Word passed that the doctors from Coney Island Hospital were eating his hot dogs, so they must be all right,” noted Nathan’s obituary in the New York Times. Handwerker says his grandfather had eventually acquiesced to using “hot dog” on signs and menus, but that change was a long time coming.

It’s been 100 years since Handwerker’s grandparents used $300 to open a five- by eight-foot stand at Surf and Stillwell Avenues in Coney Island, selling those quality franks for five cents apiece. Today, Nathan’s Famous is a multimilliondollar company, operating more than 300 stores around the globe and selling more than 550 million hot dogs a year. In 2016, New York City ceremonially renamed the corner of Surf and Stillwell as Nathan and Ida Handwerker Way.

In honor of the company’s anniversary, Bill Handwerker wrote Nathan’s Famous: The First 100 Years of America’s Favorite Frankfurter Company, chronicling the history of his family and the growth of the business—including his own 30-year career there. So-called “frank lessons” impart words of business wisdom from three generations of Handwerkers.

“When it became apparent that Nathan’s was going to be 100 years old, I decided I had to write a book,” he says. “There are so many valuable lessons [to learn] from a family business and a small business.”

He pointedly included family fights and many of the other struggles of building Nathan’s Famous.

“The overall thrust of the book is to celebrate my grandparents and father and what they accomplished but also give some hope to others,” he says. “Failure is a learning experience. Don’t give up. Many people have failed at first. If you have a good idea and a dream that you believe in, don’t stop.”

Many of the early stories come straight from Nathan himself via recordings that a cousin made with him in the early ’70s.

“[My cousin] sat down with my grandfather and took a couple hours to record his stories, what his life struggles were,” says Handwerker. “I get chills thinking about what a gift he gave our entire family by doing this. His foresight in sitting down and taping my grandfather was a key part of my book.”

The rest, Handwerker says, is written from his own experiences and remembrances.

The Place to Be

Nathan and Ida’s children grew up thoroughly involved in the business, with their earliest years spent in a bakery-box-turned-playpen in the stand’s back room. As a young child, Handwerker likewise thought of Coney Island—and Nathan’s Famous in particular—as the place to be.

“I always wanted to go to Coney Island and work with my father. From the earliest age, I’d want to at least have my birthday parties at Coney Island,” he recalls. “My mother would help meet my request, and we’d pile four or five friends in the back of her station wagon.”

More often, he got his chance to visit Nathan’s Famous when school was out for the summer.

“We would drive to Coney Island on the Belt Parkway,” he recalls of the torturous trip from the family’s Long Island home. “As the little one, I got the worst seat, sitting in the space between the front and back seats. In those days, there was no air conditioning in the car, and there would be so much traffic that it would be like a steam bath. But it was worth it.”

As soon as Handwerker turned 13, he got his employment papers and started working, officially, for Nathan’s Famous. His day started at 6:15 a.m. when another employee would pick him up on Long Island for the commute. They would punch in by 7:00 a.m.

Handwerker’s first job at the stand was to set up the front counter for the lunch rush: putting out paper cups and plates, refilling salt containers and napkin dispensers, and readying the drinks.

“As a teenager, I was exposed to all the line jobs in the front and back of the house—from mopping floors and washing dishes to preparing all the products,” he said. “My father and grandfather believed that the only way to really know a business was to learn it from the ground up and actually experience it,” Handwerker says. “It was a valuable lesson to learn.”

During his first summer working at the stand, Handwerker jokingly told his parents that he wanted to write a book about all the life and business lessons he was picking up.

“I would come home from work, we’d be around the dinner table, and I’d be telling my parents, ‘I have to write a book someday about this,’” he says.

Ithaca College landed on Handwerker’s radar thanks to a family trip to visit his older brother Kenneth, who was in IC’s class of ’72.

“I was sold,” he said. “I never wanted a big school— that was critical in my thinking—and I loved the town of Ithaca. I just felt at home there.”

He took business law and accounting classes but opted for general studies as his major.

“My mother and father taught me that the best thing I could do was get a general education,” he explains.

Taking a broad range of classes also served Handwerker well in love. He met his future wife, Amy Thalheim ’77, when his English professor and her psychology professor set them up.

“They knew us and said that we would be a perfect match,” says Handwerker. The two recently celebrated their 41st wedding anniversary with their two children and three grandchildren.

Ithaca College continued to play an important role for the family, even after Handwerker and his brother graduated. Their father served as a college trustee from 1977 to 1994 and as an honorary trustee until he passed away in 2011. He also provided a donation in 1977 to open an art exhibition space on campus—the Handwerker Gallery.

“My parents’ love of the arts, and the fact that both my brother and I went to Ithaca College, is what spurred the idea,” he said. “We look forward to doing what we can in the years to come. We will always be a part of the Ithaca community.”

Handwerker returned to New York City and to Nathan’s Famous after graduation at a time when his father was rapidly expanding the company into a national fastfood chain. Nathan’s Famous had gone public nearly a decade earlier.

“I had a little apprehension initially because my father put me in the position of marketing manager,” he says. “I did the best I could, but my background was in operations.”

He transitioned into corporate food service, managing purchase orders and logistics of the restaurant operations.

“That’s what I came to love and did for the rest of my career,” says Handwerker, who eventually became senior vice president for Nathan’s Famous.

“My knowledge helped to bring the operations into a more modern method of distribution,” Handwerker says. “Through my grandfather’s and father’s years, we were using more local purveyors. Once we became a faster restaurant chain, things had to change.”

That proved challenging, he said, because of family loyalties to those local businesses.

“One of the things my grandfather and father taught me was that loyalty and a handshake were better than any written contract,” Handwerker says. “Throughout the course of my career, it was tested many times.”

Another part of the job was judging the annual hot dog–eating contest, which had begun at Nathan’s Famous when Handwerker was still an Ithaca College student.

In preparation for the event every year, staff would put the Nathan’s Famous logo everywhere to ensure it was in every newspaper photograph and TV shot, and then they would get passersby off the street to serve as contestants.

A Lifetime of Lessons

The family sold Nathan’s Famous to private investors in 1987, but Handwerker stayed on until 1996. After leaving the business, he explored other options in the restaurant industry and ultimately decided to switch to the field of finance.

“Over the years, my father and I discussed stocks and markets, savings and investment philosophy, diversification and all the plans that are necessary for a strong foundation to build a family business,” he says.

Handwerker feels those discussions with his father were instrumental in guiding him in successful business practices. In 2001, he obtained his securities licenses and went into business as a financial planner. Today, he works with individual clients and corporate 401(k) plans, but the majority of his clientele is made up of small businesses—an appropriate use for a lifetime of lessons learned. 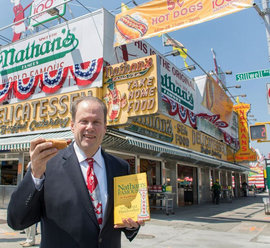 What's in a Name?

Oscar Mayer ’19 didn’t fully embrace his name until he arrived at Ithaca College.

If that moniker rings a bell, it’s probably because Mayer is named for his famous ancestor who in 1883 founded the Oscar Mayer Company—known, of course, for its hot dogs, bacon, and deli meats. As the well-known jingles goes, “My bologna has a first name, it’s O-s-c-a-r. My bologna has a second name, it’s M-a-y-e-r.”

The first son in each generation gets the family name. “I’m the sixth to be named Oscar Mayer,” he says.

Each Oscar has had a different middle name. Mayer’s is Raymond, after his maternal grandfather, and the family called him Ray as a child to thwart schoolyard teasing.

“The jokes write themselves when you’re named after Oscar Mayer, a meat company,” he points out. “College was a sort of clean slate, so I fully embraced being Oscar, which has been wonderful.”

General Foods (now Kraft Heinz) bought the Oscar Mayer brand before Mayer was born, but he has a share in the Oscar and Elsa Mayer Family Foundation, which funds programs that aim to improve early childhood care and education. The youngest Mayer family members also get matching funds for hours spent volunteering.

“Not only does it stimulate charitable thinking and charitable qualities in the younger Mayers, it also allows them to give back to the communities they feel personally attached to,” he says.

Mayer’s teen years volunteering with YMCA Camp Ockanickon in New Jersey led him to IC—in particular, the college’s natural lands program. The family foundation matches $50 for every hour he volunteers, up to $1,000, so Mayer has been able to give $1,000 each to the YMCA camp and to the Ithaca College Natural Lands program.

“My biggest draw was the [nearly] 600 acres of natural woodlands situated just behind campus that are accessible to all students,” says Mayer, who is now one of the project’s three student managers. “I just thought it was the most wonderful resource that an environmental studies student could ask for.”