How Sweet It Is

Maple syruping, begun as an independent study project, could grow into a student-run business. by Karin Fleming ’09 with Maura Stephens

Wanted: Someone with a lot of patience who is familiar with forestry, biology, chemistry, fire-building, cooking, marketing, and sales. Must enjoy being outside in the snow, mud, and Ithaca’s biting wind for extended periods of time. Strong back a plus; love of nature a must.

While this ad hasn’t yet appeared in the classifieds, it might make its way into IC’s course catalog in the near future. Kristopher Shapiro ’09, Charles Tonks ’09, and Rachel Glassberg ’10 all fit this description, and as part of an independent research project, the three spent the spring semester tapping sugar maples, boiling sap, bottling syrup, and selling the fruit of their labors.

In fall 2007, as part of a research project on the feasibility of siting a wind turbine on College land, philosophy major Shapiro was reviewing surveys on South Hill’s forested areas. He noticed a clump of sugar maples southeast of the College, and a new project was born.

Shapiro, with his friend Tonks, an art history/philosophy and religion double major, brought his idea to retired biology professor (now scholar in residence) John Confer, who introduced them to a local maple syrup producer. By spring 2008, they were tapping trees and lugging the sap they gathered to an offsite facility for boiling. This took a lot of time and energy: It takes roughly 40 gallons of sap to make one gallon of syrup. Also, the students were funding the project from their own pockets.

Last fall Shapiro and Tonks partnered with associate professor of biology Jason Hamilton to make the production an official Ithaca College project. This enabled them not only to get course credit for their work, but also to get funding to build a fireplace near the trees being tapped. Their backs were glad for the fireplace, and this season they did most of the boiling without carting heavy buckets too far. They’ve also made plans for a sugaring shack — a wooden shelter in the woods for boiling — to be constructed in the future.

Glassberg, a business administration major, joined the project as marketing and sales director. Much of the work, she says, was a “learn-as-we-went” experience.

While the project had many successes, the 2009 spring sap season was relatively poor. The best time to tap trees is when the daytime temperatures rise above freezing and the nights remain cold. This year fewer days met these criteria, so the students collected less sap than they’d expected.

“We sold out in two days, so that was good,” says Glassberg. “But we ended up with only about two-and-a-half gallons of syrup.” To make the best of it, they bottled the harvest in 7- and 12-ounce bottles labeled “South Hill Maple Syrup,” grades A and B. Despite the setbacks, there’s great enthusiasm for expanding the project, which involves not only different departments, but also different schools: business, H&S, and communications. Glassberg plans to continue her work on the project with some of the volunteers from last year.

Hamilton is creating a course, which means more students can become involved in the production, marketing, and distribution of South Hill Maple Syrup. “Ithaca College right now is putting an emphasis on experiential, integrative education,” says Hamilton, “and this will be a premier project along those lines. The students learned every aspect [of maple syrup production], from agricultural laws to biology to marketing to sociological aspects of starting up businesses. It’s an excellent showcase of how integrative sustainability education works.”

GOOD FIRST TRY! I LOVE MAPLE SYRUP. MAYBE THE EXCELLENT RESTAURANTS IN ITHACA COULD FEATURE THIS SYRUP ON THEIR FRENCH TOAST AND PANCAKES! 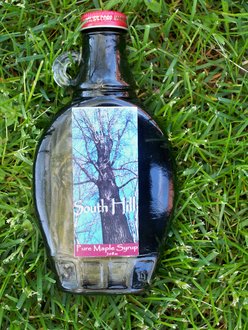