It was an inauspicious first date on the day of David Lebow’s graduation from Ithaca College. Betsey Ladd, a casual friend, agreed to meet him downtown after Commencement. Expectations weren’t high: David’s 16-year-old cousin tagged along.

“I thought it was going to be a quick trip to Plums, a nice bar on Aurora Street,” David laughs. “But obviously, that's not how it ended.” Before he left town, David told Betsey he’d call in a week. “Instead, he called me four hours after he left Ithaca,” Betsey says.

The budding relationship was a long-distance one until Betsey graduated a year later. They found jobs in the same cities, first in Los Angeles and then Chicago, and married in 1986.

“What happened with Betsey and me is indicative of our relationship with the College,” David says. “For me, it was always a place to be with people you considered family. For example, a group of us practically lived at the student radio station. We would be there until 3:00 a.m. because that’s where we wanted to be. We improved things to the point where our ratings beat every commercial station in Ithaca. That a group of kids could do that is something I’ll remember all my life. My closest friends at IC are among my closest friends today. On good days and on bad, having these lifelong relationships is important to all of us.”

In 2005 the couple established the David A. Lebow ’83 and Betsey Ladd Lebow ’84 Scholarship, which is awarded annually to an outstanding student in the Park School who has shown evidence of potential contributions in the field of communications, a commitment to the campus community, and demonstrated financial need.

“After starting our scholarship, I met Laura Seivert ’07, the first scholarship recipient,” David says. “She is inspiring! Her entrepreneurial spirit, her drive to make IC work for her, her attitude, and the experience she gained at IC were motivational. If giving (scholarship money) can help more people like Laura, then we want to do more.”

The Lebows have also made significant contributions to the Ithaca Fund for Communications and the athletics and events center. “IC needs an A&E center,” David says. “An incredible number of students participate in NCAA, intramural, and club sports. They need places to compete. Also, both our sons are high school athletes, and we recognize the importance sports play in their social lives, physical health, and sense of mental balance.

“Giving is a two-way street,” he adds. “As it helps others at IC, we get motivated by the connection to the faculty, administration, and students. It creates a positive circle. The more we give, the more we like it. It continues to dawn on us, the responsibility we have to give back in life.”

Want to help Ithaca College students who have financial need receive an excellent education? You don’t need to have a fortune to make a difference. Join David and Betsey Lebow in contributing to a scholarship or endowing your own, and watch your generosity change lives. Visit ithaca.edu/campaign and click on “Give to Campaign” at the left, then check “Scholarships” on the contribution form. 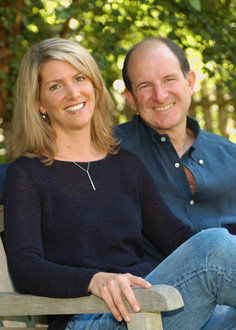 “After starting our scholarship, I met Laura Seivert ’07, the first scholarship recipient,” David says. “She is inspiring! Her entrepreneurial spirit, her drive to make IC work for her, her attitude, and the experience she gained at IC were motivational. If giving (scholarship money) can help more people like Laura, then we want to do more.”