Allan Miller, M.S. ’97, joins an NSF expedition to Antarctica as a research fellow and education consultant.    by Alex Meril ’07

For some people, exploration is just a hobby. For Allan Miller, M.S ’97, it’s a lifelong passion. He’s a licensed pilot. In 2003 he was a finalist to become an educator astronaut with NASA. And last December Allan joined an international team of teachers and scientists on one of Earth’s ultimate ventures — a two-week research cruise to Antarctica on the Swedish icebreaker Oden.

The trip was sponsored by the National Science Foundation as one of the first activities for the International Polar Year, a global research campaign in the Arctic and Antarctic, and Allan went along as an NSF educator-researcher fellow.

“I was in the right place at the right time,” Allan says modestly of his fellowship and of becoming a team member aboard the Oden. “I was always interested in exploration and going to the frontiers, whether it be space or one of the poles.”

A year ago, Allan was teaching sixth grade in the Kenai Peninsula of Alaska when the NSF asked him and his family to move to the nation’s capital for a year as part of the Albert Einstein Distinguished Educator Fellow-ship. This program of the Triangle Coalition for Science and Technology Education brings math and science teachers to D.C. for a year fellowship with federal agencies. Allan’s job was twofold: he was a consultant on K-12 education and furthered his own professional development by bringing back what he’s learned to Alaska.

Allan’s role on the Oden expedition was primarily as an educator, using shipboard telecommunications to create journals, post photographs, and conduct teleconferences for K-12 classrooms around the country. He also served as research assistant, working alongside scientists from the United States, Sweden, and Chile who conducted a multitude of observations. One of the most interesting things he assisted in was the Antarctic Sea Ice Processes and Climate Project, a worldwide effort to collect data that are being used to create computer models showing how sea ice is changing in relation to global climate change.

Allan’s experience was enhanced by the friendships he made with the culturally diverse staff of teachers, scientists, and crew members. While on the expedition, he realized the differences between how the United States and the rest of the world feel about climate change. “The international scientists and teachers are ahead of us in their thinking,” he says. “They’re way beyond the stage of questioning whether or not worldwide climate change is really happening. They understand it’s a human-induced problem that we need to find a way of dealing with.”

While Allan says that the Oden expedition made him “reinvigorated as a lifelong learner,” and opened his eyes to the natural beauty of the Antarctic region, he embarked on it as no stranger to international experiences. He worked with the U.S. biathlon team and in 1996 married Joan Smith, a two-time Olympic biathlete who competed in Albertville and Lillehammer. Allan has also taught in Russia, and was part of a team that helped develop student exchanges with the isolated city of Magadan, in the Far Eastern Federal District, which had been a transit center of the Stalinist labor camp system. In 1990 Allan started taking regular teams of students and teachers on exchanges and visits to study in Magadan schools.

Allan says his education as an exercise and sport sciences major in IC’s School of HSHP was an integral part of his career growth. He credits ESS professor Betsy Keller for setting an example as the type of teacher he wants to be and associate professor Greg Shelley for giving him “a set of listening and communication skills that have been useful in every position I’ve had ever since.”

When he is not teaching, flying, or dreaming of a trip to the stars, Allan’s number one interest is Joan and their three children. This summer the family moved back to their home in Alaska, where Allan resumed his regular teaching position.

Of all of the remarkable places he’s seen and countries he’s lived, Allan holds Alaska close to his heart. “I love the snow,” he says. “I’m much better when it’s -20 degrees outside than when it’s 80 degrees. I’m in love with Alaska.”

The skies are clear there, too — which makes it a perfect place for stargazing. 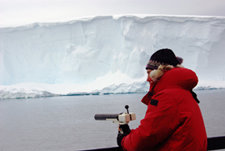 Allan flying over the Ross Sea by helicopter 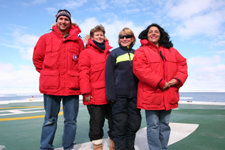 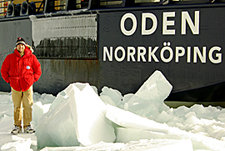 Allan and the Swedish icebreaker the Oden