It's Alive! Jon Karafin '04 and His Science-Influenced Art

Growth, evolution, energy, response, reproduction, order, and regulation. These are the seven requisites for life, as well as specific scientific terms. And they were the inspiration for a 25-foot-by-35-foot living scientific sculpture — basically an enormous — created by Jon Karafin ’04 and displayed at police headquarters in Rochester, New York, in November – December 2007.

He’d begun a prototype two years earlier, working in his kitchen, seeking the advice of sometimes skeptical scientists. “It took nearly a year and a half of research and planning to develop the mathematical and geometrical designs that compose the underlying principles of the structure,” Jon wrote in his exhibition notes. In summer 2007, working seven days a week, he spent months, with the help of volunteers, installing what was billed as the “world’s first fully living sculpture.”

The sculpture consisted of nearly three miles of PVC pipe formed into a treelike skeleton that supported more than 25,000 hand-fabricated pieces and 360 microbial fuel cells. The fuel cells were common baker’s yeast, which, when fed sugar under aerobic conditions, reproduced indefinitely and generated enough energy to circulate chemicals through the sculpture. That caused crystals to grow, produced light, created sound (“the entire sculpture was geometrically tuned to produce sound, like a pipe organ”), and pumped water throughout the sculpture — making it truly a living work of art.

It’s no wonder that the Ripley’s Believe It or Not syndicated feature devoted a panel to the two-ton work and plans to include it in its next edition as well.

During the installation, Jon developed and ran a program with the Rochester After School Academy to teach kids age 11 to 14 principles of both the arts and sciences that led to the creation of the sculpture. Jon hoped this project would help improve Rochester’s dismal 39 percent high school graduation rate. The students helped with the building and installation, and got the added bonus of interacting with police officers. Jon also hopes the kind of technology he employed in the project might be used to produce larger amounts of energy — enough to power vehicles, perhaps.

Fuel-cell technology wasn’t among the subjects he studied at either school; on that Jon’s self-taught. He’s fascinated by the intersections between art and science, and concerned about the future of energy generation. “I’d hoped to integrate these technologies into a more pure scientific form,” says Jon, “so that rather than science informing art, it would be art informing science. I’ve continued to do a lot of research into how to scale these microbial fuel cells into automotive designs and have vehicles run on organic materials — a living car, which would be kind of like driving a plant.”

Alas, such work isn’t readily funded, nor does it pay the bills. Jon found a job that does blend his interests. He started as a compositor at a film-industry company called In-Three and was quickly promoted to supervisor of production operations.

“In-Three takes live-action material shot in 2D,” he explains, “and uses numerous artistic processes, including proprietary software and technologies, to convert it into perfect stereoscopic 3D for theatrical release. Our current project is working with Disney and SPI (Sony) on a film called G-Force.” He’s also the official company recruiter. “Anyone looking to get into visual effects,” he offers, “should please feel free to contact me.”

Jon’s combination of generosity, arts, sciences, technology, and, well, nuttiness, were nurtured at Ithaca College. “The entire Park School helped shape me — too many names to list,” he says. “There is one professor in particular, Megan Roberts, who was a role model for me. Her experimental sculptural work is eclectic and eccentric, and she’s a bit crazy herself.”

He too enjoys working with youth, but thinks his mentoring may be limited to what he does on the job. “At the end of my exhibition,” he says, sadly, “the City of Rochester cut nearly all youth funding. Without support from the community and government, [such youth] programs will cease to exist.”

Not one to think of glasses half empty, Jon perks up. “But who knows? If you asked me 10 years ago, I doubt I would have predicted I’d be working in visual effects. My hope is that in 10 years I’ll still be learning, creating, innovating — and doing something I love.” 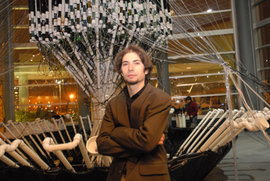