“Fred Wilcox told me I wrote like a French philosopher,” says Jennifer Patterson. She laughs, and adds, “and he didn’t mean that in a good way.” The associate professor of writing urged her to avoid emulating the dense scholarly works she was reading and, instead, find her own unique voice. She found it—and a successful writing career.

After IC, Patterson earned an M.F.A. in creative writing at Columbia University, specializing in nonfiction. But it was marrying her husband, Mathias Samuel, that really fused her personal voice, private life, and professional persona into one. Patterson began writing a syndicated newspaper column called “Newlyweds,” which led to the publication in 2005 of 52 Fights, a playful and frank memoir about the couple’s ups and downs in their first year of marriage. She later served as creative consultant on an ABC pilot based on the book.

Today, Patterson’s audience is online and her medium, increasingly, is video. A mother of three and a self-proclaimed “foodie,” she writes and video-blogs about her cooking adventures and family life for her own site, unplannedcooking.com. She also contributes content for the popular babble.com.

“Having children made me think more about how important food is and how much I wanted to raise my kids to eat according to values,” Patterson explains. Appreciating the art of cooking made her and her family more attuned to the health, environmental, and ethical aspects of food. It also made her taste buds come to life, she says.

Her blog has given her a community of like-minded people: something a stay-at-home mother finds deeply valuable. And recently, it has given her another emerging avenue for self expression: product marketing. She and a neighbor starred in their own commercial for a blogger campaign sponsored by I Can’t Believe It’s Not Butter. The pair’s commercial aired on TV, along with other finalists, during the first week of American Idol’s new season in January. 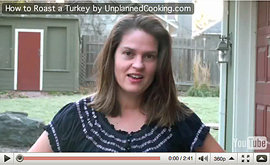