From professional athlete to the Catholic priesthood.   by Sheryl A. Englund

When the IC football team took the 1991 Division III national title in the championship game against the University of Dayton, quarterback Joe Fitzgerald ’93 was in seventh heaven. Joe remembers with relish, too, standing shoulder-to-shoulder at the 1996 Olympic opening ceremony in Atlanta with fellow U.S. Olympian Shaquille O’Neal. Days later Joe heard the swelling cheers of the crowds when he scored a goal against Sweden for the U.S. Men’s Olympic Team Handball Squad. (The U.S. team lost the game in the final minutes and was eliminated after six games; Sweden went on to win the silver medal.)

Losing was not a crushing defeat for Joe; the young athlete always put things in perspective. “When IC won the national [football] championship,” recalls the North Babylon, New York, native, “I said that if the birth of my first child or the day I say my first mass is not a bigger event than winning a game, then I don’t have my priorities straight.” Both paths seemed possible to him at the time.

There were many proud moments during his sports career — which included a decade traveling with the national handball team and a year playing professional handball in Sweden — but none compared to how he felt this past June 10. On that day he did actually celebrate his first mass as a Roman Catholic priest, after completing his studies at the Seminary of the Immaculate Conception on Long Island. More than a dozen IC friends attended Joe’s ordination the day before at St. Agnes Cathedral. Since then he has been serving as one of four priests at St. Killian Church in Farmingdale, a large congregation with a bishop in residence.

A few weeks after that momentous day, on August 3, Joe married Lauren Avellino ’04 — to her Ithaca College sweetheart, Jason Macy ’03; it was Joe’s first time officiating at a wedding. “Ithaca College was such an important part of our lives,” says Lauren. “We were blessed to have Father Joe initiate our life together.”

Despite the great change in his life, much has remained the same for this athlete and believer. “The spiritual journey,” Joe observes, “is very similar to training for an athletic event. They both take a great deal of discipline.”

Joe still works out when he can — he completed the New York City Marathon last year with a time of 4:11:12 — but now he views athletics as a way to reach and relate to people. “People love their priest,” he says. “There aren’t too many Olympic priests, or priests who played football at a great school. My experiences help me get into lives in a different way.”

Father Joe is the greatesy priest ever!!

MR. FITZ!!!! I was in your 8th Grade Social Studies class at East Cobb Middle School team B!!!Might i also add that you, Mr. Drake, Mrs. Lane and Ms. Newcomb made it an awsome team. I don't know if you remember but you gave Lauren, Alicia, and I a group name because we were always singing and had us sing a song about dreams. Well I know you are doing great things and Im positive that your words are a great inspiration to everyone as they were to your students back then. Keep it up!!

When my wife and I were strolling one early morning in Babylon Village, we just turned the corner from Deer Park Avenue and headed west on Main Street. Joe came running by, keeping in shape for the Olympics. As Joe passed by I blurted out "Practice makes perfect". When Joe turned the corner to head north on Deer Park Avenue, I heard him call back - "Perfect practice makes perfect". I told my wife that I am using that saying from now on, and I have. 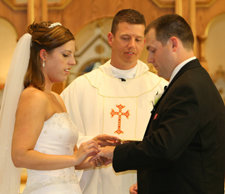 The wedding of Lauren Avellino '04 and Jason Macy '03, Joe's first as a priest.