When the Boston Marathon bombings occurred, Paul Ghostlaw ’90 and his wife were at mile 25 waiting for a table at a restaurant as they watched runners go by. “Suddenly, [race officials and police] moved everyone inside,” Ghostlaw recalls. The power was out, and phone service was spotty. As “Are you OK?” texts began pouring in to him from his friends and family, says Ghostlaw, he knew something had gone seriously wrong.


The decision to help was a swift one for Ghostlaw, who moved to Boston right after graduating from IC to launch Beantown Physio, a sports and orthopedic physical therapy practice. “There were so many of us locally and nationally that felt a good kick in the gut at that time,” he says. “I wanted to do more than offer money.”

Everyone else on his team at Beantown Physio agreed, and within a week of the incident, they started spreading the word on social media and to hospitals that they were offering free rehabilitation services to victims of the bombing. They were prepared to handle as many people as asked, he says, but he knew there was a chance it would be a slim pool—some victims were from out of town while others would likely need specialized help or maybe none at all.

It wasn’t until August that they finally got a call—from Michelle Mahoney. She had been cheering on runners at the finish line with her boyfriend, Jim Blackburn, when the first explosion threw her to the ground, severely injuring her legs. “I knew after coming out of my first surgery that, although they had to salvage my left leg, I was going to keep it,” she says.

But doctors told Mahoney not to put weight on the leg for four months, causing the muscle to atrophy. “What was going to happen next was really uncertain for me,” she says. Doctors mentioned the Beantown Physio offer to her. So she called.

“Michelle was walking fairly well,” says Ghostlaw. “She had a noticeable limp. You might think she had just sprained something.” Over the next 11 months, they worked two or three times a week on improving Mahoney’s leg strength and range of motion through soft-tissue massage and mobility exercises.

“I was active before and wanted to jump back in,” says Mahoney. “Paul helped me see I wasn’t ever going to get to that point until I took a step back and built a strong foundation.” She officially ended treatment in July and is back to jogging and hitting the gym.

“I can’t say I’d have the strength to deal with what she and some of these other folks have,” he says. “It’s been a hell of a gift working with her.”

The two have kept in touch. In the spring, Ghostlaw plans to watch Mahoney take a very important walk—down the aisle to marry Blackburn.

For more stories in the Faces of Changes series visit:

- Learn more about the "faces of change" on our cover 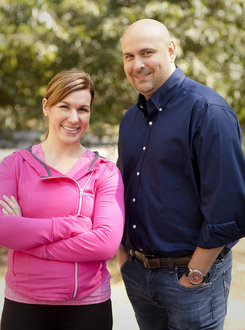 “I can’t say I’d have the strength to deal with what she and some of these other folks have,” he says. “It’s been a hell of a gift working with her.” - Paul Ghostlaw '90

Michelle Mahoney’s story was featured in the National Geographic Channel’s special “Inside the Hunt for the Boston Bombers.”