Being the first person to receive a national honor for your humanitarian work can put quite a feather in your cap. Doing so alongside Bruce Springsteen? You might want to make more room around the brim.

Last January, Ken Fisher ’80 found himself sharing the spotlight with the Boss. Both were being honored with Lincoln Awards, a new program recognizing supporters of the country’s veteran and military families. Fisher received the Citizen Award and was among only 10 Lincoln Award recipients, in the company of awardees like Springsteen and Dean Kamen, inventor of the Segway.


Fisher garnered the nod for his work with an organization his uncle Zachary began in 1990, the Fisher House Foundation. As chairman and CEO of the not-for-profit, Fisher builds “comfort homes” for families of hospitalized military personnel and veterans. There are more than 60 Fisher Houses in the United States, Germany, and the United Kingdom, each within walking distance of military and VA medical centers. Families can stay in these houses for free, and the foundation has put the cumulative monetary savings at around $235 million.

“It’s important to be recognized for your efforts, but at the end of the day, it’s furthering your cause,” Fisher explains about his receipt of the Lincoln Award. “It just focuses attention on why I’m here in the first place, [for] military and veteran families, the forgotten entities.”

There is a synergy between Fisher’s philanthropy and his “day job,” as he jokingly refers to it. He is a senior partner at Fisher Brothers, based in New York City, and part of the third generation of the company’s leadership. Fisher Brothers oversees the leasing, management, and marketing of more than 6.5 million square feet of commercial space in midtown Manhattan. Fisher says the experience gained through the business can be—and has been—brought to bear to benefit the foundation, and ultimately, the military families who use it.

“You can’t just take in life,” Fisher says. “If you’re born into a family business, you’ve had opportunities and you need to be mindful of the fact that not everybody does. When you give back to your community, the community gets stronger.”

It’s tempting to think that Fisher comes from a military family. He doesn’t. The impetus for his philanthropic work comes from the cultural milieu of his formative years.

“I went to school in the mid-1970s, right after Vietnam and at a time when people were really shying away from the military,” he says. “But you have to remember the sacrifices the person in the uniform makes and the family that stays home. When one of them gets wounded, the stress factor on the family [increases],” he adds. “The world does not come to a grinding halt for them because a loved one has been hurt.”

Last year, Fisher had the opportunity to talk about Fisher House and Fisher Brothers with a new audience: Ithaca College students. He delivered the inaugural lecture in the Jahn Family Civic Leadership Series to a packed house at the Dorothy D. and Roy H. Park Center for Business and Sustainable Enterprise.

“It was such a thrill to be there and see the campus and go to the spots I remember,” he recalls. “Then to actually speak to students—that was one of the biggest thrills I’ve ever had.”

“Ithaca was a great place to go to college,” Fisher says. “It laid the groundwork for so much of what I do today.” 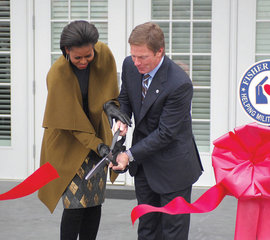 “If you’re born into a
family business, you’ve
had opportunities and
you need to be mindful
of the fact that not
everybody does.
When you give back
to your community,
the community
gets stronger.”