Learning from the Past

The development of Western civilization can be traced back to the medieval and Renaissance eras, when historical milestones such as the evolution of a mercantile economy and the Protestant Reformation were changing the course of human society. Recognizing the significance of these eras, Ithaca College has introduced the medieval and Renaissance studies minor as a new addition to its academic curriculum. Dan Breen, assistant professor of English, started the minor as a way for students to learn more about the history and culture of this crossdisciplinary time period and its relevance to the world today.

“These historical periods are fundamental to our adequate understanding of modernity,” Breen explains. “In order to understand our own etiology, we have to understand where we came from. The medieval and Renaissance thinkers, working in art, philosophy, literature, music, and religion, have contributed in major ways to the foundation of our civilization.”

In 2006, Breen established the Ithaca College Medieval and Renaissance Studies Faculty Colloquium to allow faculty to share research associated with the era. According to Breen, meetings were well attended, and students showed interest in exploring aspects of the field. After assembling a committee to represent medieval and Renaissance education, Breen was able to initiate the minor in the fall of 2009.

Elias Barkey ’11 is interested in the minor because he says it can enhance his work as an English major. “While literature greatly affects the culture surrounding it, the culture also affects the literature,” Barkey says. “I want to gain a greater understanding of medieval and Renaissance culture so I can see how it shaped the writing during that time.”

With courses offered in six of the departments in the School of Humanities and Sciences, this minor is able to provide a comprehensive exploration of medieval and Renaissance culture. Stephanie Goodenbour ’10, a drama and English double major, says she was ecstatic to learn that this minor had been implemented but disappointed that the timing had not worked out in her favor. Still, Goodenbour encourages students to take advantage of the learning opportunity.

“There’s more to the Middle Ages than knights and the Black Plague, and there’s more to the Renaissance than da Vinci and Shakespeare,” Goodenbour says. “This new minor allows students to sample courses in a variety of areas. And this, I feel, is especially fitting, since the ‘Renaissance individual’ is indeed well-rounded.” 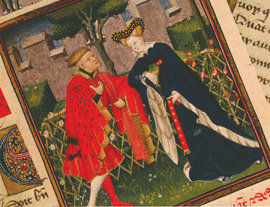 Composite detail of manuscript from the works of Christine de Pizan (1365–c. 1431)

Image from the British Library — Picture-desk.com