Ithaca College is ranked as one of the top 25 LGBTQ-friendly campuses across the nation by Campus Pride, a national organization promoting LGBTQ-friendly learning environments. It is also ranked the second-best college in the nation for LGBTQ students by BestColleges.com, a popular college search resource for high school students.

Campus Pride’s web profile of IC includes this anonymous sentiment from a 19-year-old transgender student: “Ithaca College has given me a home and a family like I’ve never had before. Every day I’m encouraged to better myself and keep my head up, to go to class, to talk to my professors, to be something through my interactions. I have been able to come out to my biofamily in a way where I felt comfortable and supported. The LGBT Center was the first place at Ithaca where I really knew I was welcomed and was happy to be here. My life, self-perception, and attitude towards my orientation/identity has changed positively. I’m proud to call Ithaca College home.”

How did IC become one of the leading college destinations for LGBTQ students in the country? And, are there lessons from that success that could help other marginalized members of IC’s community?

The answers are not simple, and the college’s recognition was not earned overnight. Various groups on campus have worked to end sexual orientation and gender identity discrimination on campus for decades. BiGayLA, a campus student organization that offered services to LGBTQ students, was formed at IC in the 1970s. More than 20 years later, in 1999, students raised their voices, and a committee of students, faculty, and staff convened to discuss the needs of LGBTQ individuals on campus and to determine action steps to address those needs. The Center for LGBT Education, Outreach and Services, was established two years later.

Luca Maurer, the center’s founding director, said he used a collaborative approach. Before launching new initiatives, he held listening sessions on campus. He asked students what they wanted to keep responsibility for, and they said they wanted to retain ownership of certain things, like panels where students share their personal stories of being an LGBTQ or allied person on campus and provide an opportunity for the audience to ask questions. Students had been holding these panels since the 1970s. Today, the LGBTQ student organization Prism sponsors the panels.

But if the center is a national model, Maurer insists that designation comes with caveats: One, that “Ithaca College is not perfect when it comes to LGBTQ inclusion. We have a lot in place, yet there is more to do.” Two, that “top 25” and “second-best in the nation” aren’t good enough for Maurer. Perhaps it is this mindset that has made the program such a success.

Maurer is also adamant that the idea of viewing underrepresented groups as separate and distinct populations is a mistake. In this, he emphasizes a mindfulness of intersectionality—the theory that it’s impossible to separate the experiences of oppressed or underrepresented groups. “Understanding intersectionality is critical,” Maurer says. “People are multidimensional. LGBTQ students are students of color, are students with disabilities. This is a place where people bring their whole selves.”

In naming his ultimate priority, Maurer is guided by a mission that would benefit all students, and, in turn, the future of the college. “Basically, I’m about access,” he says. “What I always want to be doing is helping create the conditions so students can feel valued and affirmed and respected in their learning and working and living environments, so they can then commit all their energy toward achieving their goals.” 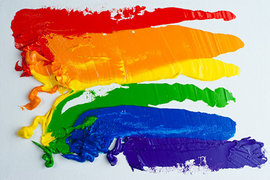 SOME OF THE RESOURCES FOR LGBTQ STUDENTS: