"A few of our songs were probably written or worked on late at night right in this booth,” says Andy Compolieto ’98, sitting by the window at Ithaca’s State Diner in December. “Probably?” counters Ben Lee ’98, his bandmate. “No — definitely!”

More than a decade after the two began playing music together, they were back in “gorges town” for a couple of engagements with Jo Henley, their latest band — one at the Haunt and one at Castaways. Between gigs, they were visiting as many old stomping grounds as possible.

During their freshman fall semester, Andy walked into a friend’s dorm room looking to hang out. There, along with his friends Lauren Gullo ’97 and Kerri-Ann Murphy* ’98, he found Ben, strumming a guitar. “Next thing,” Ben remembers, “we’re out on the balcony, talking music, and everything’s clicking.”

That was the beginning of a friendship, musical collaboration, and shared dream that have lasted ever since. The musical fit was perfect: Andy wrote poems and lyrics; he’d show them to Ben, and the two began to write music around them. “We’d hang out in stairwells,” Andy says, grinning, “for the nice echo, nice reverb. He’d play; I’d sing.” Ben taught him the basics of guitar, and Andy began to accompany Ben.

After graduation they both moved to Boston, where Andy’s fiancée, Ellen Dean ’98, was attending graduate school. Andy and Ellen married in July 2004; Ben was Andy’s best man.

They remain in Boston but miss their college town. “Ithaca was a great place to play,” says Ben. That’s why they came back with Jo Henley, which they first formed as an acoustic duo but expanded to five pieces. (The name is from their middle names.) Ben plays lead guitar — acoustic, including the solos. Andy backs him up on rhythm and is singer and front man.

In October 2006, they took a month to produce their first CD, Long Way Home. It was inspired largely by their Ithaca experiences. The song “Fingerlakes,” in particular, is a heartfelt but slightly tongue-in-cheek tune about what makes Ithaca special: “All the days they slip away while the world’s spinning round/Another late night love can’t pin those feet to the ground/Nobody cares what’s going on . . . outside of town.”

They started work on their second CD, Sad Songs and Alcohol, last June; it’s due out soon. They laid down tracks at the Recording Company in Schenectady, New York — a three-hour drive from Boston — where Tim Lynch, Andy's close friend since high school, is recording and mixing it.

Ben and Andy decided to make this CD more expansive than their first, incorporating a wider range of instruments. The fuller sound, Ben notes, has a downside: “You never get as much done as you want.” Andy nods in agreement.

Over the years the songwriters’ collaborative process has evolved. “On Long Way Home,” Ben explains, “most of the songs were cowritten in the truest sense: we worked the music out together, with the lyrics following. But this new record is more of Andy coming up with sketches of songs, me adding my parts and suggestions, and then the band learning them. We played most of them live for a while before recording them, which allowed them to develop before being put to tape.”

Jo Henley performs live about eight times a month, to Boston home crowds as well as in New York and Vermont — and enjoys loyal fan bases. The musicians somehow manage to squeeze in day jobs as well: Ben works as a client account specialist for the Hay Group, a management consulting firm, and Andy is the program administrator in the Ph.D. program of the economics department at Boston University.

Both men see their future clearly: writing, recording, and playing music. Ithaca is still a big influence. “We’d love to come back soon,” Andy says. “I feel like our music, especially this new CD . . . is like driving around Ithaca.” 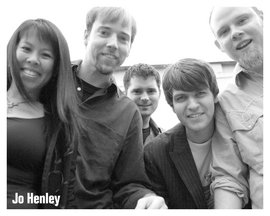