Your 2007/3 issue (“For Love of Crew” cover) was excellent, with great features.

My attention was captured especially by the piece about Tom Everett ’66, M.S. ’69.  Tom was the high school instrumental music teacher for  Batavia City School District when I arrived in 1968. He was a gifted musician, with trombone his most elegant playing instrument.

Tom’s love of new music and modern music led to some odd concerts. In one memorable piece, I think some of the kids were playing garbage can covers!

Tom was a lovely person, and I liked him a lot. He developed some very outstanding young musicians while he was at Batavia. And I’m not at all surprised by his success at Harvard. That was the right place for him, with his intellect and his willingness to try new things.

By the way, I like the heading “Pairings” as a very nice replacement for “Couplings.” 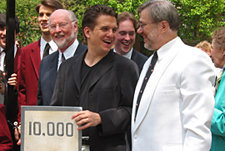