On any given NFL Sunday, Jen Sabatelle ’94 is in the CBS Broadcast Center in New York with the top programming and production executives from the network. As the vice president of communications for CBS Sports, she oversees the overall media relations efforts and strategy for CBS Sports, including corporate communications and the promotion of all CBS Sports’ personalities and programming, setting up interviews for print, television, radio, and web.

In addition to the NFL, CBS Sports broadcasts large-scale events such as the NCAA Division I Men’s Basketball Tournament, the U.S. Open Tennis Championships, the Masters, and the PGA Championship. Sabatelle also manages the publicity efforts for CBS Sports Network and works in tandem with CBS’s other sports properties, including CBS Interactive and Showtime Sports.

During the live broadcast of the pregame show, THE NFL TODAY, she and other executives are in a command center, monitoring the show and the live games. Sabatelle and her team promote the broadcasts, using traditional and social media to handle any PR issues that may arise. She works closely with host James Brown and analysts Dan Marino, Bill Cowher, Boomer Esiason, Shannon Sharpe, and other big-name sports celebrities.

On Wednesdays during football season, Sabatelle often heads down to NFL Films in Mount Laurel, New Jersey, for the taping of Inside the NFL, an Emmy-award winning show where Brown, Phil Simms, Cris Collinsworth, and Warren Sapp talk football — a show that will air later that night on Showtime.

“There’s no typical day here,” she says of her job. “Our broadcast schedule is similar year after year, but every day, every game, every event is unique, with its own storylines, personalities, and challenges.”

For instance, this was the first year CBS Sports partnered with Turner Sports to televise the NCAA Men’s Division I Basketball Championship across four channels. Almost everything was new, from the format and schedule to some of the announcers.

“It was a hectic few months from January to April, leading up to the tournament as two different media companies worked together on all aspects of the tournament, including programming, production, sales, and marketing,” she says. “When the tournament’s anthem, ‘One Shining Moment,’ began to play after the championship game, there was a great feeling of accomplishment that our hard work had paid off and the first year of the venture had been a success.”

Sabatelle grew up around athletics. Her father, Thomas Sabatelle ’64, was a high school athletic director, and the family schedule revolved around playing sports, attending games, and watching sports on TV.

“I don’t remember a time when sports were not the main focus of my life,” she says. “When I went to college, the focus shifted from the playing field to working toward a career in sports television.”

A couple of years after she graduated from Ithaca College, Sabatelle landed a job at the National Football League, working as a liaison between teams and broadcast networks. That led her to a position at CBS Sports as coordinator for programming and marketing. In 2002, she moved to the CBS Sports communications department and eight years later became head of her department as the vice president of communications.

“When I got my first chance in sports, I hoped that if I worked really hard and did a good job, someone would notice, regardless of my gender,” she says. “I am thankful that I get to work every day in a business that has captured my attention since I was a little girl, and that I get to do it alongside the best men and women in sports.”

Lesley Visser, a reporter for THE NFL TODAY, says a lot has changed since she started covering the NFL in 1976. Back then, her press credentials often read “No Women or Children in the Press Box.” Now, she says, there’s no limit to where women can go.

“Jen is a major asset for CBS,” Visser adds. “She’s smart, funny, and she’s kind. I’ve seen her address corporations and sit with a coach and have a beer, and I’ve seen her do both with ease. She’s a modern woman for a modern age.”

Simms, lead analyst for the NFL on CBS and analyst on Inside the NFL, says he’s seen Sabatelle work in high-pressure situations, and he’s been impressed by her work ethic. When a story explodes, he says, she handles it well, guiding the announcers on how to address certain issues. And stories are exploding all the time these days, Simms says, even on Twitter.

“You sit there calm as can be, and literally 20 seconds later it’s a hurricane, and you have to be ready to deal with it,” he says. “I know she’s tough enough to withstand it and deal with it.”

“She is an alert executive and extremely comprehensive in her preparation,” says Brown, host of THE NFL TODAY and Inside the NFL. “She’s a very good listener, and she’s passionate about what she does.”

She’s also passionate about fitness, and Brown says she relishes pushing herself to the limits in the gym.

“She reminds me of athletes with whom I’ve played over the years,” Brown says. “They take anything you throw at them, and they work hard because they know it will make them better. It doesn’t intimidate them. All those skills translate nicely to what she’s doing as a VP.” 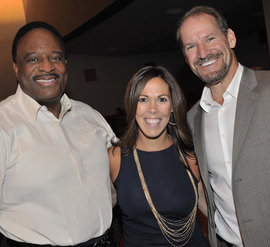