Thanks to IC’s Michael “Bodhi” Rogers and two students, a digital record of the physical space where Abraham Lincoln started drafting the Emancipation Proclamation will be permanently preserved. Eventually the public might not even have to travel to the site itself to see the cottage’s structure in detail.


Rogers, an associate professor in the physics and astronomy department, and Scott Stull, a lecturer in sociology/anthropology at the State University of New York College at Cortland, took two students to Washington, D.C., for a week to work at Lincoln’s summer home. Using 3-D laser technology, they scanned the interior of the cottage, which is the only designated national monument located in the District of Columbia.

Though the cottage is open to the public, this project, once completed, will preserve the integrity of the home and increase its accessibility, as anyone with an Internet connection will eventually be able to view the historic site online. The project, which was recently featured in the Washington Post, was funded by a grant from Ithaca College.

Read more about the scanning of President Lincoln's Cottage. 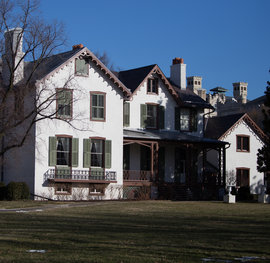