“No one ever expects to have a premature baby,” says Teeters. But one in nine women do, according to the March of Dimes. Teeters was one of them.

Immediately after Aidan was born, he was whisked off to the neonatal intensive care unit (NICU), and when Teeters was finally able to see him the next day, she says, “there were wires and tubes—all the things you’re not expecting when you hold your baby for the first time.” He was tiny enough that he could wear her husband’s wedding ring as a bracelet.


Fortunately, Aidan thrived, defying his parents’ and doctors’ worries about potential major health problems. Today, he’s a happy, healthy six year old—one who visits the NICU each year on his birthday to see the preemies and has also rubbed elbows with President Barack Obama and a slew of celebrities in his role as national ambassador for the March of Dimes. “I don’t want other babies to have to go through the same thing that I went through,” he says.

Aidan’s road to ambassadorship started when he was still in the hospital. Now, his participation in the March for Babies has become an annual tradition, one his family has nurtured—adding more and more friends and family members to the team and striving for bigger goals. This year, Aidan’s 36-person team collected $28,037—making them the seventeenth leading family fundraising team nationwide. Over the years, they’ve raised about $75,000.

Aidan’s ambassadorship has provided more opportunities for the family to give back. “Everyone has been touched by March of Dimes, whether we know it or not,” says Teeters. President Franklin Roosevelt established the nonprofit to find a cure for polio. When the organization realized that goal and later turned its attention to premature birth, it funded the research that discovered folic acid as an important vitamin in helping prevent birth defects. The March of Dimes now promotes the benefits of folic acid to pregnant women and creates awareness of heelstick screenings that newborns typically receive as a way to test for genetic disorders.

During the family’s travels for March of Dimes, Aidan helps people understand the nonprofit’s goals as he tells the story of his birth and stimulates awareness of the organization’s programs at public events, hospital visits, and seminars for corporate sponsors— literally putting a face on the cause.

“We’re representing all the families,” Teeters says. It’s spurred an interest in community service for Aidan. Asked about his career plans, he says, “First, I’ll be president of the March of Dimes, but I don’t know what I want to do after that. Maybe then I’ll be the president of the United States.”

For more stories in the Faces of Change series visit:

- Learn more about the "faces of change" on our cover 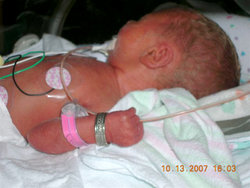 Aidan as a newborn, wearing his father's wedding ring as a bracelet.