“It’s surreal to glance in your rearview mirror and see the underbody of a pickup truck,” says Mary May Pratt. “It’s not like a movie. In real life, when a truck flies through the air, it’s not in slow motion.”

It’s been two winters since Pratt glimpsed that flying underbody. She was negotiating a snow-covered road in a rural area with no cell phone coverage, on her way to a hockey game near her hometown in western Massachusetts. Thanks to her EMT training, she knew where to park her car, how to approach a vehicle that was off the road and on its side, get its engine turned off, assess the lone female driver’s condition, and hold traction on her neck as a precaution until a passing motorist made an emergency call on a land line.

Ever since she can remember, Pratt felt drawn to a career in medicine. Besides being a trained EMT, she’s certified as a nursing assistant and a birth doula. In addition to completing “shadowing” experiences with two surgeons, a physician’s assistant, and a nursing team in a pediatric intensive care unit, she spent a summer working for Hospice Services of Western Massachusetts. After graduating with a bachelor’s degree in aging studies, she’ll begin a master’s in program at Duke University to become a gerontological nurse practitioner.

“What drew me to Ithaca College was its aging studies major, and what drew me to aging studies and to nursing were two experiences I’d had with elderly family members,” says Pratt. “My grandmother had been a wonderful athlete and a field hockey coach, but in old age, even though she was still cognitively sharp, she’d become bedridden, and my mother took care of her. I was around four or five, and I’d sit with her and describe
what was going on in the yard, what the birds were doing, things like that. I noticed how much she appreciated that. I also noticed how kind, smart, and independent the visiting nurses were. I was seven when my grandmother passed away, but having been a part of her care gave me an ease and respect for older adults. They’re wise and grateful, and have a lot to give back.”

Those feelings were reinforced when Pratt was 15 and her great uncle developed what she called “a deep and devastating” bed sore.

“While the nurse cared for the wound, I was drawn by my uncle’s need for comfort and went to the other side of the bed and held his hands until the procedure was done,” she says. “At the same time, I was fascinated by the nurse’s skill. I felt this conflict, wanting to be on both sides of the bed. That experience helped me realize that nursing is one of the few medical professions that lets you combine healing and comforting.”

She also discovered that minoring in writing would be integral to her medical career.

“Through writing, I can express my feelings more honestly than I can by simply talking about them,” she says. “That’s an outlet I’ll need because ultimately I want to go back where I grew up and take care of the elderly. That’s going to bring me into close contact with death, but that’s okay. If we embrace life, we should also embrace the end of life. That makes it less scary. Creating a healing atmosphere for patients and their loved ones allows them to feel the emotions that come with each step of their journeys.”

The latest step in Mary May’s journey was leaving IC. The class of 2010 had some 1,300 graduates — 100 more people than the population of Mary May’s hometown.

“There were 19 kids in my high school class,” she says. “To me, Ithaca was a big city. When my parents dropped me off in the pouring rain my first day of freshman year and then drove off, I said to myself, ‘I can’t do this.’ But going from being completely scared and desperate to getting into my top grad school is a wonderful feeling. It’s a big step forward.” 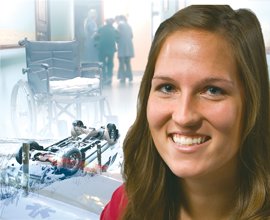