Imagine all those dense novels you had to read in high school, boiled down to 12 words. With pictures.

That’s the idea Jack Wang, chair of the writing department at IC, came up with. But his target audience isn’t made up of high school kids. It’s babies.

After his daughter was born in 2008, he read a lot of board books and they left him, in a word, bored. There wasn’t a lot of variation in the books, which typically feature the names of colors or shapes.

He thought, “What if there were a board book that appealed to both babies and their parents?”

Hence, Cozy Classics, a series of books that take the stories from literary classics like Herman Melville’s Moby Dick and Jane Austen’s Pride and Prejudice and tell them in 12 words. Once he had the concept, his brother, Holman, came up with a way to illustrate the books that would give them a signature look, like Eric Carle’s collage technique.

For each of the first two books, Holman created 9-inch, wool, needle-felted figurines, which he posed and photographed for different scenes in the books. Each photo has a natural background, which gives the images a hyper-realistic quality.

The challenge comes in taking works that are inherently adult in nature, and recasting them for a young audience. And taking a book that’s more than 200,000 words long and reducing it to 12.

“You can’t have any subplots. You have to focus on the main narrative arc. Simplicity is the key,” Wang says. “Moby Dick is fundamentally about a captain chasing a whale.”

He uses words like “sink” and “float” teach opposites.

Wang is hoping his books will catch on, and that well-read parents will derive a certain “shelf esteem” from having the books on display. 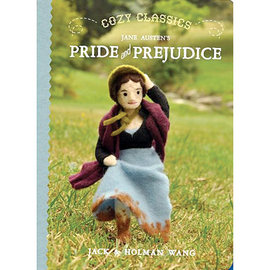