The idea for Michael Mott’s debut album came from a New Year’s resolution: look up.

“I meant it both literally and metaphorically,” he says. “I was so focused on getting to where I needed to go that I never really took the time to look up and appreciate the beautiful architecture of the New York City skyline. Furthermore, this city can get you down if you’re not optimistic and focused on what you want and how you’re going to get it.”

So the 2007 IC graduate and Broadway composer decided to bring together some of his friends—including Jeremy Jordan ’07 and Ben Fankhauser ’11 of the original Broadway Newsies cast—and other stars of the stage and screen to record a dozen original tracks.

Other performers on the album include Zachary Levi (from NBC’s Chuck and Disney’s Tangled), Justin Guarini (runner-up from the debut season of Fox’s American Idol), and Laura Osnes (from Rodgers and Hammerstein’s Cinderella and Bonnie & Clyde).

The result is Where the Sky Ends, a mix of pop melodies, soaring ballads, and toe-tapping swing numbers. “I chose the title Where the Sky Ends because it’s limitless, endless, hopeful,” he says. “It’s intangible; you can’t define it.”

"Where The Sky Ends" Promo Video from Michael Mott on Vimeo. 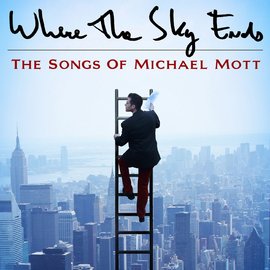