Many books about World War II focus on the violence of combat, but in The Beautiful American, author Jeanne Mackin ’70 brings the conflict off the battlefield. In her latest work, Mackin tells the story of Nora Tours, an expatriate American who travels from France to London in search of her missing teenage daughter at the conclusion of the war. On her search she unexpectedly meets an old friend, Lee Miller, serving as a war correspondent.

Miller is a famous model-turned-photographer who had a well-known affair with surrealist Man Ray before the war. Tours and Miller were childhood friends back in Poughkeepsie, New York, where Lee suffered from a devastating trauma.

The inspiration for the novel came from Mackin’s own father’s experience as a G.I. in World War II. Mackin said she always wanted to write about how the war affected the soldiers’ families back on the home front.

“My mother said the war changed my father,” Mackin said. “He and the other men in his generation endured terrifying events, and they brought them home in their memories and nightmares. In France, where most of my novel takes place, the mothers and wives and daughters aren’t on the battlefield, but they suffer greatly during and after the war.”

Mackin’s versatility as a writer has allowed her to publish seven historical novels, a mystery trilogy, and several nonfiction pieces including the Cornell Book of Herbs and Edible Flowers.

“It is like living a different life,” she said about writing historical fiction. “It has taken me from 1920s Paris to 1870s New York and medieval France,” she said.

Her other historical novels include The Sweet By and By, about 19th-century spiritualist Maggie Fox; Dreams of Empire, about Napoleon’s trip to Egypt; and The Frenchwoman, about a seamstress in prerevolutionary France. The Beautiful American will be Mackin’s first book available in audio format. 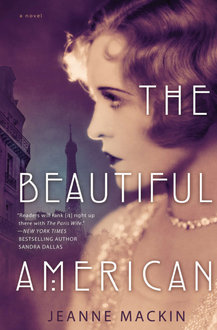