A new solar electricity project to be completed this summer will meet approximately 10 percent of Ithaca College’s annual energy needs. The 2.9-megawatt project, to incorporate more than 9,000 solar panels, is funded by the New York State Energy Research and Development Authority (NYSERDA).

In its first year, the installation will generate 3.55 million kilowatt hours, about the amount of energy required to power 500 average-sized New York homes, and will offset the greenhouse gas emissions of 187 cars.

Richard Kauffman, chair of energy and finance for New York State, said, “I applaud the efforts of Ithaca College, along with those of residents, businesses, and organizations across New York, whose solar projects help us achieve our aggressive renewable energy goals, combat climate change, and build a clean energy economy.”

The solar project brings IC closer to its goal of becoming 100 percent carbon neutral by 2050, as the 2009 Climate Action Plan pledged to do. For the past six years the Princeton Review has listed Ithaca College as one of the nation’s top “green” colleges. In 2011 IC became only the second academic institution in the world to achieve a LEED (Leadership in Energy and Environmental Design) platinum rating from the U.S. Green Building Council for two new buildings, the Peggy Ryan Williams Center and the Dorothy D. and Roy H. Park Center for Business and Sustainable Enterprise. 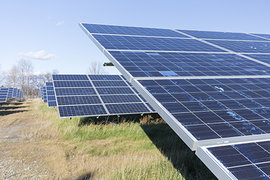