Before Middlesex was released, Jeffrey Eugenides hadn’t written a novel in nine years. Jack Wang, assistant professor of writing, refers to this hiatus as “the great gestation,” a time of development and anticipation in the wake of Eugenides’s enormously popular first novel, The Virgin Suicides.

“There are some writers for whom their first book is their best, and some critics wondered if the same would be true of Jeffrey Eugenides,” says Wang, director of the Distinguished Visiting Writers Series that brought Eugenides to campus on September 7. “But in this case, there would be no sophomore jinx."

The nine-year lapse played to Eugenides’s advantage. In 2002, he won the Pulitzer Prize for fiction for Middlesex, a story narrated by a hermaphrodite. Though his previous books focused more on the psyche and thoughts of his characters, Eugenides decided to build upon the narrative and story construction for Middlesex.

As students, faculty, and community members crowded into Emerson Suites, Eugenides read “Extreme Solitude,” an excerpt from his untitled work in progress. It first appeared as an essay in the New Yorker on June 7, 2010. He unraveled pieces of the unique love story between main characters Madeleine and Leonard.

“It’s about people graduating college and going off to confront their lives,” Eugenides says. “It’s a much more traditional novel than I’ve written before because it has stronger classical unities such as characterization and plot.”

Eugenides also taught a one-credit master class to the Writers’ Workshop, a course that is directly connected to the Distinguished Visiting Writers Series and taught by Wang. Five students get a personal conference with one of the three writers that visit the College.

“What they’re learning are two things,” Wang says. “One is the nuts and bolts of fiction-making, or poetry-making, or writing essays, and the other is getting exposure to what it means to be a writer and how one sustains faith while writing difficult pieces.”

But Wang insists that people don’t have to be writing majors get something out of attending Eugenides’s lecture.

“Our hope with these readings is, of course, to amuse and entertain, but also to inspire,” says Wang.

Acclaimed writer Paisley Rekdal came to Ithaca College as the second guest speaker in the Distinguished Visiting Writers Series. She is the author of a book of essays, The Night My Mother Met Bruce Lee, and three collections of poetry. At her reading in Clark Lounge on October 5, Rekdal read from her forthcoming book, Intimate, scheduled for publication in 2011, which combines photography, poetry, fiction, nonfiction, and memoir.

She began with a reference to Susan Sontag: “The literary fragment is the equivalent of a snapshot,” Rekdal quoted from Sontag’s collection of essays, On Photography. While the book once caused an uproar in the professional photography field, it intrigued Rekdal. She decided to create a photo album in literature. That became Intimate.

“[Intimate] is the story of my father and my mother going through a very difficult time with cancer and their relationship,” she says about one of the threads that runs through the book.

Into this story Rekdal weaves two streams of photographs. Those by Edward Curtis catalog the American Indian tribes west of the Mississippi River over a 40-year period near the turn of the last century. The other photographs she uses are by named and unnamed photographers working at the same time as Curtis. She chose these sets of photographs as the starting point for Intimate because she found the book of Curtis’s photos in her father’s study.

In the memoir part of Intimate, Rekdal writes about growing up half Chinese, half Norwegian and how it has impacted her life. She read passages from her book that describe how her mother’s Chinese family would not acknowledge her Norwegian American father and how people were always asking her mother if Rekdal was her daughter because the two didn’t look like each other. Her mother, she recalls, often replied, “No,” a response Rekdal later understood as reflective of the conflict her mother felt over the family’s biracial makeup.

For Rodrigo Ugarte ’13, the method of Rekdal’s presentation interested him.

“I’ve been to many of these kinds of events because I’m a writing major,” Ugarte says. “I liked how she added the pictures, because I haven’t seen that before.”

Rekdal says she was trying to create a new way of presenting a portrait of the human condition.

“I wanted to create a way of talking, between these photographs and between this family photo album about our ideas on photography,” she explains. “Intimate is also the story of how we represent ourselves and how we are represented through photography.” 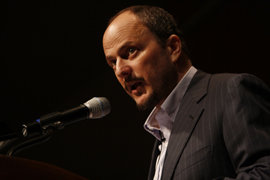 Jeffrey Eugenides, author of Middlesex and The Virgin Suicides, conducts a master class for the Writers’ Workshop.