Eric Jordan Young ’93 was in town December 18, treating Ithaca to a singular performance that celebrated the debut of his new solo album, Once in a Lifetime. Eric wanted to do something special for the city that he enjoyed so much during his years at Ithaca College.

The large audience that was lucky enough to be at the Hangar Theatre for this one-time-only show enjoyed dynamic new takes on some of Sammy Davis Jr.’s much-loved classics, interspersed with some of Eric’s own scores. The show was well received, and Young called the evening a “homecoming” for him.

While at IC, Eric was part of more than a dozen productions, including A Chorus Line, Hair, and John Brown’s Body, graduating with honors in music theater. In 2003, he was awarded Ithaca College’s Outstanding Young Alumni Award. He maintains strong ties with both the school and the city, visiting when his schedule allows.

Now a seasoned performer, Eric has appeared in Broadway productions of Chicago, Seussical, and The Look of Love as well as the revival of Ragtime. His off-Broadway credits include Jesus Christ Superstar, Ain’t Misbehavin’, and many others.

In 2006, Eric debuted his musical, Sammy & Me, at the Hangar Theatre. A biographical one-man show about Sammy Davis Jr., the production was a collaboration with local director and alumna Wendy Dann ‘93. Eric also performed in the 2009 musical Rent at the Hangar. He now lives in Las Vegas, where he hosts Vegas! The Show. Vegas! pays tribute to the musical history of Las Vegas, and in addition to his hosting duties for the show, Eric portrays Sammy Davis Jr. and several other famous Las Vegas celebrities. 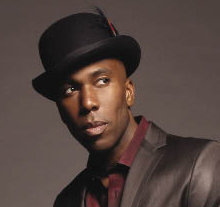