A recent grad returns to campus to revive the past and leaves renewed for the future. by Cornell Woodson ’09, former SGA president

Five months out of college and I found myself desperately needing to come back to Ithaca.

After graduation, I moved to Atlanta, Georgia. It is everything I wanted: a large city with bright lights and a rich culture. I have a job that challenges me every day and the honor of teaching kids who inspire me. Still, I wasn’t sure if I had made the right decision. I needed to be reenergized and reminded of the larger picture my Ithaca education enabled me to see, which I felt I had lost sight of recently. I needed to get myself together, because back in Atlanta 130 kids are counting on me. So, to Ithaca I went to relive pieces of my four years, if only for a weekend.

I landed in Ithaca wearing shorts, a t-shirt, and flip-flops; however, I quickly opened my suitcase to adorn myself with something more weather appropriate. I had an agenda, and there was no time to waste.

My first priority was to see the building where I spent many sleepless nights working and conversing with my peers. When I walked into the Campus Center, so much had changed. La Vincita had undergone a bit of a makeover, and the third floor had been given a huge facelift. Even though it was not my third floor, I had to admit it was an improvement.

My trip to the third floor of the Campus Center would not have been complete if I had not visited the Student Government Association (SGA). I remember when I first started at Ithaca College my goal was to be student body president by my senior year. Walking into that space five months after leaving campus was like déjà vu and disorientation combined. The new executive board is doing some amazing things, and it was nice to see them settled into their positions. This, and changes like the Dillingham renovation and Terrace 13, made it evident that Ithaca College is ushering in a new era. I realized that in 10 years Ithaca would not be the same as it was when my class was here. But to be honest, I found comfort in knowing that the College is changing with the times.

After interrogating the new SGA crew, I headed over to the Center for Student Leadership and Involvement to catch up with my mentors, who put up with my shenanigans for four years. Seeing them again is what really energized me, because they are the reason I made it through college.

As a student, I was always involved in something, and this weekend was no different. I was asked to be a guest speaker in my old Social and Cultural Foundations of Education course, taught by Teresa Michel. It was a treat to have the opportunity to share my experiences as a teacher with people who are working to enter the same field. The students had an abundance of questions, which helped me realize why I started teaching in the first place. Teaching has opened my eyes to so many new things, and I was itching for an opportunity to share everything. Talking about my kids became the highlight of my day.

I was also asked to be the keynote speaker for the African Latino Society’s (ALS) 40th Anniversary Celebration. What an honor! It made me feel like I had done something right. I wanted the African, Latina/o, Native American (ALANA) community to understand that the struggle in being an ALANA student on campus is not in vain. We are working toward a much larger goal, and that is to create opportunities for more students like us to make it to college. ALS played a huge role in my success at Ithaca College, and I owe the ALANA community here a lot.

As the weekend came to a close, I began to understand the importance of the relationship an alumnus has with his or her alma mater. It’s not just about donating to support the college’s endeavors; it’s also about connecting with current students. The College worked hard to welcome alumni back home and to create opportunities for us to interact with students. Now, I know why: Seeing how alumni are doing after college seals the deal for students that an Ithaca College education is worth it. And, for me, as an alumnus, interacting with students helped me see myself more clearly.

Thank you, Ithaca College, for a great, eye-opening weekend.

As a freshman, Cornell Woodson represented his class as a student senator. He served as the Student Government Association’s vice president for campus affairs for the 2007–08 academic year and SGA president for 2008-09, while also working as the Campus Center building manager. 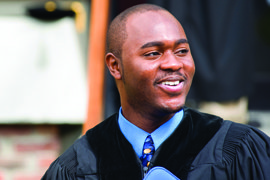