Paul Cremo ’82 got to the Met via a circuitous route.  By George Sapio

Like the proverbial kid in a candy store, cinema and photography major Paul Cremo ’82 found himself unable to resist the numerous opportunities he found at Ithaca College.

But that was getting him in trouble. His art teachers said he wasn’t spending enough time working toward his art minor, and Monte Gerlach, then assistant professor of cinema and photography, told him he should focus more on his photography.

This was difficult, as Paul was also taking voice lessons with Leslie Bennett, studio art and drawing classes with David Smyth, and bookmaking with Harry Wojcik. He also found time to perform in IC productions such as The Madwoman of Chaillot and The King and I. “Here, I was at an institution that had all these things to offer,” Paul says. “It killed me to not take more advantage of them.”

Paul’s expansive appetite for knowledge continued at Penn State, garnering similar warnings from his professors. He completed his course work for a master’s degree in film studies but never finished his thesis, an analysis of Woody Allen’s narrative technique in Annie Hall. He landed a job as a production assistant for the movie Ironweed, then followed the company to New York City, where he continued to work as a production assistant and location scout.

After a few years his intellectual hunger led him to seek out development work. He started with Aaron Spelling Productions, then moved to Spring Creek Productions, where he sought, optioned, and developed screenplay adaptations of books such as Possession: A Romance by A. S. Byatt and Fearless by Rafael Yglesias.

In 1993, Paul’s eclectic pursuits began to pay off. Through the production grapevine he heard that Peter Gelb, the recently appointed president of Sony Classical U.S.A., was looking for someone with experience in both movie production and classical music. “I contacted him, lobbied hard, and got the job,” Paul says.

This began an association with Gelb that lasts to this day. Paul was brought in as vice president of soundtracks at Sony Classical U.S.A., then Sony Classical Worldwide, tracking upcoming films through myriad contacts to secure the rights to release the films’ scores on CD. For the CD productions, he worked with such world-famous musicians as composer and cellist Yo-Yo Ma, violinist Joshua Bell, and tenor Plácido Domingo.

To find promising new projects, Paul traveled all over the United States and Europe, networking at events such as the Cannes, Sundance, and Toronto film festivals. Four of the soundtracks he helped distribute became Oscar winners: Titanic, Shakespeare in Love, The Red Violin, and Crouching Tiger, Hidden Dragon. Working as Gelb’s soundtrack point man “was extraordinary,” Paul says. “It was like another graduate school.”

Then the bottom fell out of the CD business. Paul’s mentor left Sony to become general manager of New York City’s Metropolitan Opera at Lincoln Center. Paul stayed with Sony one more year until 2006, when the company restructured. Serendipitously, Gelb called him the day he got his notice and invited him to take a new job at the Met. Paul accepted gladly — and became the opera company’s first dramaturg.

A dramaturg’s duties are numerous, but they usually involve working with the actual text of an opera or other production. Paul puts in long hours scouting for new directors; helping to develop and produce The Metropolitan Opera Live in HD series, worldwide live simulcasts of operas; helping to develop the extensive electronic subtitling system built into the Met’s seats; and — his favorite part — finding and developing new operatic scripts.

“The failure rate for a new American opera is extremely high,” Paul points out. With his assistance, Gelb redesigned the Met’s development process, making it more like the traditional process used in dramatic theaters: shepherding each new project, ensuring constant feedback, extensively workshopping a new piece, and holding out-of-town tryouts instead of just assigning a premiere date. Ten projects are currently in development at the Met — with such notables as playwright Tony Kushner and composer Nico Muhly — and Paul has a hand in all of them.

The job is highly demanding, but Paul wouldn’t have it any other way. What some called an “unfocused” college career turned out to be Paul’s perfect transcript — getting him a job that combines his loves of music, theater, and film. 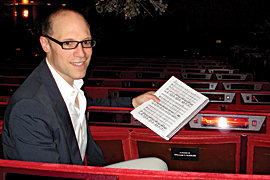