Before Peter Goranov arrived at IC, he’d only seen the United States on computer screens. The only English he’d heard was in classrooms in his native Bulgaria, 5,000 miles away.

“Sure, it was scary. I’d never been to this country before,” Goranov says. “Plus, I hadn’t studied English intensely back home, so I had to pick it up once I got here. But I got used to things. Not that it has always been easy. I only talk to my family every two weeks and only get back home over winter and summer breaks, but it’s no big deal. Lots of people do it.”

And lots of people don’t. Why cross seven time zones to study business?

“I knew I wanted to be a proprietary trader, so I went online to see which colleges would meet my criteria,” he explains. “Originally, I’d wanted to study in Germany, but I changed my mind when I found out what a good reputation American education has. That’s the big reason my parents supported me going to school so far from home.”

With more than 2,000 American colleges, though, why pick IC?

“The trading room,” Goranov says. “Very few schools in the U.S. have a facility that lets students access security exchange information in real time. Also, being close to New York City is good when you’re planning to enter the financial world.”

As Goranov settled into his American education, his circle of friends eventually included 10 Bulgarians, none of whom he’d known before coming to IC. In addition to excelling academically (Goranov made dean’s list every semester), he learned on-the-job through internships at Citigroup; Société Générale; the New York office of Israel’s Bank Hapoalim; and Erday and Company, a Wells Fargo Advisors Financial Network firm managed and directed by Timothy Erday ’94. Goranov was also chief strategist of Core Trading Consultants (CTC), the student organization that manages the Ithaca College mutual fund.

“We start with $25,000 of real money,” Goranov says of CTC. “We have a faculty adviser, but we’re in charge of investment recommendations. It’s an intense experience, and it’s made us a close-knit bunch. There’s no doubt in my mind that in 10 years we’ll be helping students, who’ll then be in CTC, by giving them internships and hiring them when they graduate. CTC will be one of the things I’ll miss most about IC.”

He also says he’ll miss the feeling of being in charge.

“Studying in this country has taught me to be independent and responsible,” he says. “Back home, living with my parents, I wouldn’t get a chance to do that.”

Going home, though, is Goranov’s plan.

“Eventually I want to go back to Bulgaria and start my own hedge fund,” he says. “I want to be the one responsible for what I do. With my own company, I can make sure that what my employees do won’t reflect badly on themselves or the firm.”

But before that can happen, Goranov needs to complement his general financial knowledge with either a graduate program in quantitative finance or a job at a proprietary trading desk. Without extensive experience, jobs like that are hard to come by. But whichever way it goes, Goranov will have the advantage of graduating with no debt load, thanks to scholarship support, his parents doing what they could, and working 20 hours a week. His part-time jobs have included tutoring German and accounting, advising fellow students on their résumés in the Office of Career Services, and managing one of the dining halls. “That job was really helpful,” he says. “I earned money, and I got my meals free.”

When his parents and sister attended his graduation in May, it was, as it was for Goranov four years ago, their first time in America. Was going to college half a world away from home worth it?

“I’ve been to a lot of company presentations at other schools,” Goranov says, “and I can definitely say that the conversations I’ve heard between IC students and representatives from top investment companies are every bit as knowledgeable as the ones those reps had with students from so-called prestigious universities, including ones in the Ivy League. IC business students are as well prepared as anybody.” 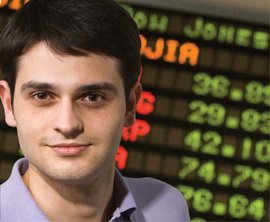 Minors: Economics and mathematics, School of Humanities and Sciences