By the time he was inducted into the United States Martial Arts Hall of Fame last year, Dennis Fitch had learned there was more to the martial arts than fighting.

Fitch was no stranger to fights when he arrived at Ithaca from Binghamton, New York, more than four decades ago. “Growing up on the streets, I was a fairly violent kid,” says Fitch. Looking back, he figures he got into fights once a month. “Every weekend, we went out looking for trouble,” he recalls. His knack for getting in scrapes didn’t stop when he enrolled at Ithaca. But one night he witnessed something that would slowly turn his life around — and gradually drain the anger that had gotten him into trouble.

“There was this guy doing weird-looking stuff over in the field house,” he recalls. “It turned out to be a Chinese martial art.”Fitch was already on two varsity teams — swimming and lacrosse. Even so, he found time to train in this newly discovered form of fighting.

After graduating in business administration, Fitch went to work in New York’s financial district. “I sat in an office where Tums was the primary food besides coffee,” he recalls. It took about 15 minutes to learn he had picked the wrong career. “Capitalism serves a purpose,” Fitch says. “For instance, I got a loan for my house. I wouldn’t have gotten it if there weren’t people up there [in New York] making money. But I just couldn’t do it.”

Fitch quit, signed with the federal anti-poverty program Volunteers in Service to America (VISTA), and began work in Pensacola, Florida, helping the unemployed find jobs. In his off hours, he took martial arts lessons with an Air Force sergeant who taught kenpo, tai chi, and Philippine stick fighting. When his stint with VISTA ended, Fitch stayed in Pensacola and eventually became a naturopathic healer, helping chronically ill people improve their health through nutrition and lifestyle changes. But he continued to study the martial arts, moving from student to teacher in the Chinese martial art of chuan fa. Along the way, he found that the formal study of fighting helped him control his anger and keep him out of fights.

“And then I learned the spiritual aspects of the discipline,” Fitch recalls. “At first you start out with all this pent-up aggression. Then it gets to the point where stuff that normally sets you off no longer makes you angry. You start looking at the full picture of life. When you have a big picture of the world, why would you get upset with somebody because they spill beer in your lap on a Friday night?”

This may seem counterintuitive to outside observers. But then there is nothing simplistic about the martial arts or the deep philosophical traditions of Asia that underlie them. And this is the point Fitch makes to his students, who are carefully selected to weed out applicants who are there for the wrong reasons.

“I teach the Golden Rule to my students,” he says. “I teach meditation, breath control, and mindfulness. I don’t want tough guys in my school.

Outstanding article. Its refreshing when you run into a martial artist that gets it.

It is such an honor to have you as my mentor in the martial arts! You have taught me many things through the years I have known...almost 30 of them...the greatest of all is to give my gift of martial arts with all of my heart!

My journey would not have to been nearly as rich if it had not been for Soke Fitch, he has truly been a great influence, mentor & friend in my life. 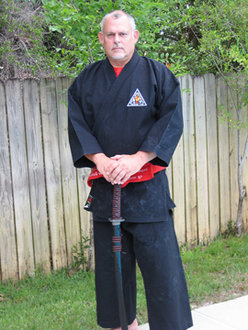