“My life after graduating was pretty standard for most Park School kids,” says Jim Klimek ’06. The television-radio major moved to Los Angeles where he’d landed a position with the Ellen DeGeneres Show. That’s when his path started to deviate.


“I taught Ellen to play Guitar Hero,” he says. “It was one of my skills at the time, and it got me in the door.” After three years at Ellen, he’d become known as the guy who could juggle and do lighter tricks and other unusual feats. “

I was always telling people, ‘If anything goes wrong, I can fall back on my juggling,’” says Klimek. “I started thinking, could I make this my living?” 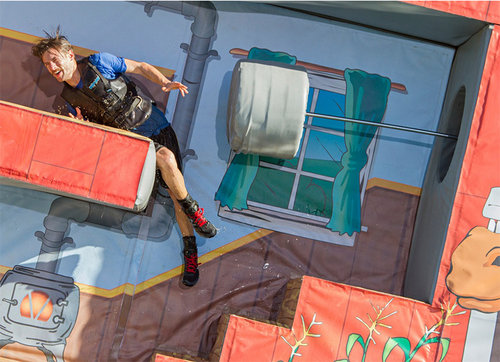 Above: Jim competes on the game show Wipeout. Photo provided.

All those random talents hearkened back to his childhood in Maine. “Throwing rocks and throwing knives was a thing you did,” Klimek says. He started juggling at age 11 after seeing a clown perform. He practiced on his own and soon three balls became four, then five. Eventually he moved on to juggling knives, and fire, and branched out into lighter tricks and freestyle Frisbee moves.

“It didn’t make me popular as a teenager,” he says. “It’s just paying off now.”

While he was still working at Ellen, Klimek auditioned for the Lucent Dossier Experience, a circus company, and from there he began getting bookings to perform his stunts at corporate parties and other gigs. Then Hollywood came calling, offering him work in commercials for companies like Purina and Big Lots, and appearances on Glee and Community. He even won the obstacle game show Wipeout. 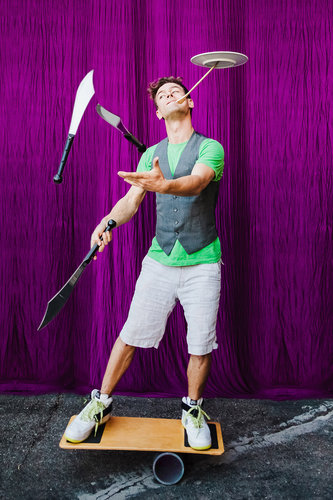 Although his work is fun, make no mistake: it’s hard work, too. Klimek says he spends at least three hours a day working out and practicing his various talents. “It is its own reward, the idea of living by my own schedule,” he says. “I’m just going to do it as long as I can.”

If juggling doesn’t work out, he is confident he can further leverage his television production skills. “Ithaca has given me the connections and the confidence,” he says. “I always have that safety net.” 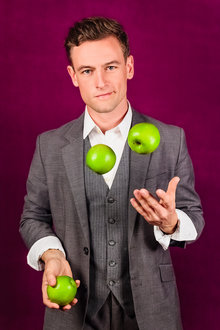 "It didn't make me popular as a teenager. It's just paying off now."